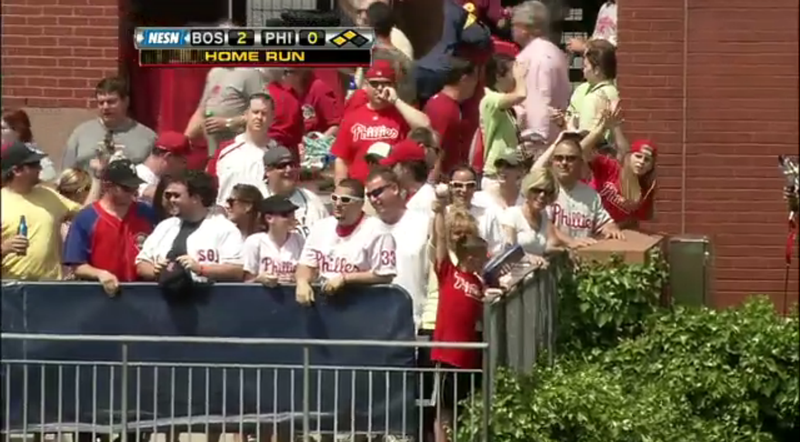 Cliff Lee's win total this season: 0. Cliff Lee's win total after today's game: Still 0. Cliff has had multiple quality starts this season before and after his trip to the disabled list, but he has not been given very much run support to work with. Unfortunately, Cliff didn't have his best stuff today against the Red Sox. His last start against this team ended in a two-hit shutout, one of his brilliant games from last season.

Mike Aviles led off this ball game with a solo shot to left field after taking just three pitches. 1-0 Boston.

42 pitches later in the top of the second, Aviles struck again with an RBI single to left field, putting the Sox up 2-0.

In the top of the third with two men on, Jarrod Saltalamacchia sent an absolute bomb to Ashburn Alley in left field, pushing Boston's lead to 5-0. The home run was an estimated 446 feet.

Meanwhile, Josh Beckett was silencing the Phillies' lineup. Through six, the only ball hit past the infield was a double from Cliff Lee in the third inning. The other three hits came from infield singles.

Jake Diekman entered this game in the eighth. His last appearance was his ninth inning fiasco in Chicago when he walked two, allowed one hit and four earned runs. In today's appearance, he struck out the side on 11 pitches.

Pete Orr scored on a sacrifice fly from Juan Pierre in the bottom of the eighth. With the bases loaded, Ty Wigginton grounded out to end the inning. One run would be all the Phils could muster. For what it's worth, Carlos Ruiz was indeed available off the bench.

Chad Qualls pitched a scoreless ninth following Diekman's perfect eighth. The Phillies could not score in the bottom of the inning, dropping their second straight game to Boston, 5-1.

The Washington Nationals will come to town tomorrow for a three-game series. Kyle Kendrick and Gio Gonzalez will square off tomorrow at 7:05.