Cliff Lee, Kyle Lohse On The Hill As The Phillies & Cardinals Clash 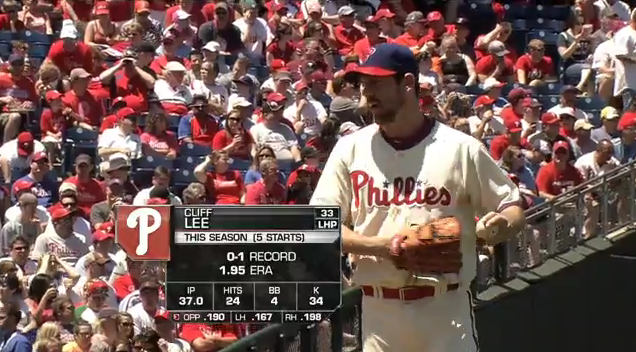 Well last night was pretty crazy. Despite the bad pitching and near-lead blowing outings, the Phillies still managed to rack 10 runs on a season-high 18 hits in their 10-9 win over St. Louis last night. Taking game one of this four-game set doesn't really say a lot, but hey the Phils are back at .500 and tonight they'll aim to be above that mark for just the third time this season.

Cliff Lee (0-2, 2.66 ERA) will make his seventh start of the year tonight as he takes on the Cards. Lee got hit hard in his last start on Saturday against the Red Sox. Lee allowed five earned runs on 9 hits through 7 innings of ball. Lee took the loss, his second of the year, as his offense could only amount one run against Josh Beckett. Now don't completely blame the offense on this one, Cliff got hit around bad and five runs isn't as small of a margin to come back to as two or three runs is. Anyway, Cliff is still seeking his first win of the year and remains the only Phillie starter (besides Kyle Kendrick) who has not won a game this year.

The last time Lee pitched against the Cards was in Game 2 of last year's NLDS. He was pushed around by the Cards, allowing five earned runs on 12 hits through 6 innings. Lee walked two, but also struck out 9. However, it was not enough to mount a win. In his regular season career against the Cardinals, Lee is 3-1 with a 1.48 ERA.

The Phillies will take on righty Kyle Lohse (5-1, 2.91 ERA). In Lohse's last start on Saturday against the Dodgers, he 5 2/3 innings of three run ball. Lohse yielded 11 hits and struck out four, but got the no-decision as the bullpen lost the game for Lohse. Lohse lost Game 1 of the NLDS last year after allowing six runs (five earned) on seven hits through 5 2/3 innings against the Phillies. In his career, Lohse is 3-4 with a 3.43 ERA against the Phillies.

Last night the Phils were able to hit the ball. Don't take it like they're going to keep doing it though. You know how this team can be. Hopefully I'm wrong and they will hit the crap out of the ball tonight. Shane Victorino and Freddy Galvis both drove in three runs last night and with a big blast from Ty Wigginton, they were able to get the win. We'll see if tonight's lineup can do some damage against Lohse.

>> In Game 1 of the NLDS, both Raul Ibanez and Ryan Howard homered off of Lohse. Those two are not in the lineup as Ibanez is in New York and Howard is in Clearwater.

>> With Thursday's win, the Phillies are 16-11 at the new Busch Stadium, the most for any NL team outside of the Central Division.