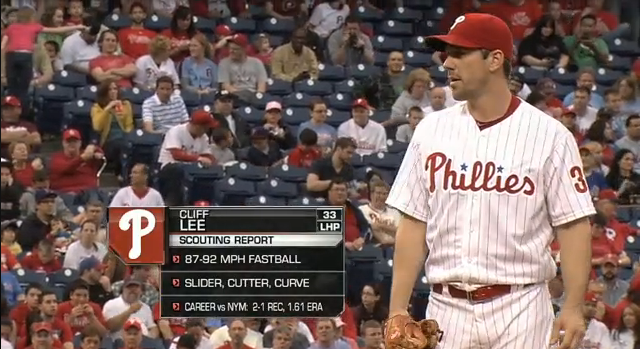 With the Phillies winning last night's game 5-1 behind the arm of Joe Blanton. They will attempt to sweep this two-game series with the Astros behind Cliff Lee.

Cliff Lee (0-1, 2.17 ERA) is seeking his first win of the season and what other club to go for it against than the Houston Astros. In Lee's last start, his first back from the DL, he tossed six innings against the Mets allowing two earned runs on five hits while striking out 6. Lee has not pitched bad at all this year, it's his offense that has lacked to give him any help. The Phillies are 0-4 when Lee starts this year and the offense has scored two or fewer runs in three of his four games. That's not cool. In his career, Lee is 1-2 with a 6.89 ERA in 15 1/3 innings against the Astros.

At the time of writing, the Astros have not yet announced their starting pitcher. Jordan Lyles, currently pitching for Triple-A Oklahoma City, could be Brad Mills' decision. Lyles is 5-0 with a 3.49 ERA in Triple-A. Even if it is Lyles, the Phillies can still play the ball like they did last night. Small ball behind great pitching does wonders.

The Phils managed 5 runs on 10 hits to back Joe Blanton's 7-innings of one run ball. Cliff Lee deserves run support, as does Roy Halladay. In Halladay and Lee's combined last 9 starts, the Phillies are 0-9. That's pathetic and it's time to change it around.

The Phillies are going for their first three-game winning streak of the season. Hopefully the lineup can bang out enough runs to support Cliff.