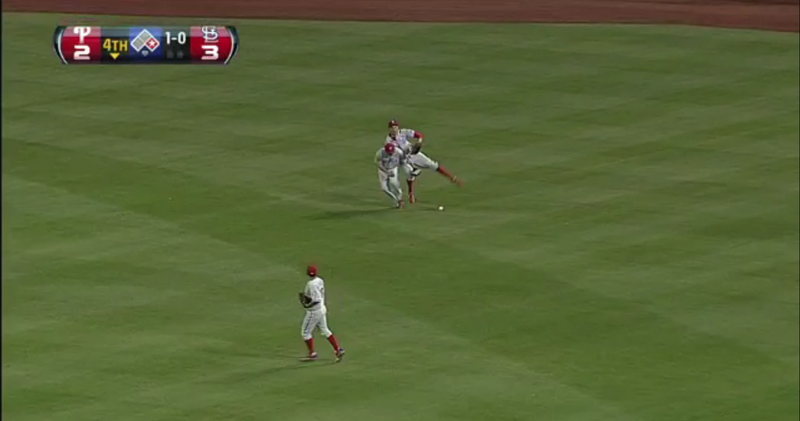 Today is May 25th and Cliff Lee does not have a win under his belt this season. Since he came back from the disabled list on May 10, Phillies fans have been patiently waiting for him to pick up a win. The fans are tired of waiting, and so is Cliff. A frustrating outing would not do him any good tonight.

Jimmy Rollins and Juan Pierre brought home the first two runs of the game in the top of the second. After back-to-back singles from Placido Polanco and Freddy Galvis, Rollins sent Polly home with a single to right field. Pierre reached on an error which allowed Galvis to score.

After Matt Adams hit a double to right field, Shane Robinson sent him home with a double down the right field line, putting the Cardinals on the scoreboard.

Rafael Furcal led off the bottom of the third with a solo homer to left field on the first pitch he saw from Cliff Lee. The homer was reviewed since it took a hop off the wall, but the review resulted in a tied ball game.

Shane Victorino and Hunter Pence had an inning to forget in the outfield in the fourth inning. Shane misread a liner from David Freese which sailed over his head and sent Freese to third base. Yadier Molina singled up the middle to score Freese, giving the Cards a 3-2 lead. Matt Adams was safe at first on a pop-up to right-center. Poor communication ended in a collision between Shane and Hunter, but Shane was able to gun down Molina at third base.

A little side conversation was going on in the dugout between Cliff and Shane over Shane's play on Freese's triple. We watched as the two men exchanged some angry words before Charlie Manuel came in and gave Shane a pat on the back while leading him somewhere else in the dugout. Not good.

Juan Pierre doubled into the gap in left-center field to score Cliff Lee from first base. This tied the game up at 3 in the top of the seventh.

Jose Contreras allowed one hit (single to Molina) in 2/3 of an inning before Jake Diekman came in to end the eighth. Matt Adams doubled to deep center, but, Shane's throw home went to Galvis, the cut-off man, who made an excellent throw home which allowed Carlos Ruiz to tag out Molina. All-around great play.

Raul Valdes pitched a heart-stopping ninth inning. After allowing a single and a walk, he struck out Tyler Greene and Matt Holliday to end the inning, sending it to extras.

Juan Pierre singled to center field to lead off the top of the tenth, and Hunter Pence would send him home on a two-run home run to right field. 5-3 Phillies.

Jonathan Papelbon came in for the save in the bottom of the tenth and pitched a perfect 1-2-3 inning striking out one. The Phillies are back over .500.

Cole Hamels will take the mound tomorrow night at 7:15 in the third game of this four-game series.