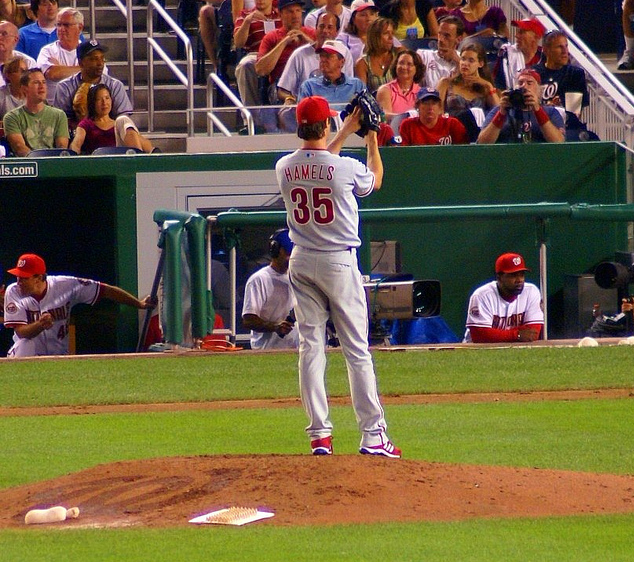 There are a lot of things I hate. I hate mayonnaise, snakes, racoons, and horse raddish. But there is nothing I hate more than seeing the Phillies being swept. Now, the Phillies came into this "Take Back the Park" weekend with a .500 record and after the first two games, they sit 13-15. Tonight, they are attempting to prevent a Nationals' sweep and Cole Hamels (3-1, 2.78 ERA) is on the hill.

The lefty Hamels is coming off of a six inning outing against the Braves in which he allowed two runs on six hits while walking two and striking out six. Hamels received the no-decision, his first of the year. Hamels has been spot on with location in his past two starts, but has allowed two runs in each of those starts. If Hamels does give up some runs tonight, hopefully his offense can back him up. In his career, Hamels is 10-4 with a 2.71 ERA in 129 1/3 innings against the Nats.

The Nationals are sending out right hander Jordan Zimmerman (1-2, 1.89 ERA) in an effort to win their 8th consecutive game over the Phillies. Zimmerman is coming off of his first rocky outing of the year inwhich he allowed four runs (three earned) on 8 hits while striking out six D-backs. In Zimmermann's past five starts, the Nationals have averaged fewer than three runs per game which has resulted in Zimmerman being handed two losses and two no-decisions. In his career, Zimmerman is 0-2 with a 6.60 ERA in 15 innings pitched against the Phillies.

The Nationals have won 11 of their last 13 against the Phillies, seven consecutive. It is the longest winning streak for the Nationals franchise over the Phillies since the 1989 Montreal Expos won eight in a row. Now this is going to be a bad sign if the Phillies can't win a game in Nats Park behind Cole Hamels.

What the sign is? The Nationals aren't screwing around and they're ready to contend with us.

Charlie Manuel's squad has been out scored 12-4 in the past two games and it's up to tonight's lineup to break the Nats' streak.