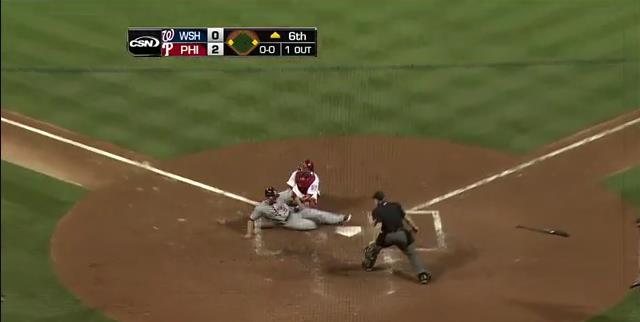 Cole Hamels tossed eight scoreless innings and the Philadelphia Phillies avoided getting swept by the Washington Nationals with a 4-1 win in the finale of a three-game set.

The last time Cole Hamels faced Washington, he plunked Bryce Harper in the back, later stating that he intended to hit the rookie as a welcoming to the big leagues. That led to a five-game suspension for Hamels, but he didn't let the media hoopla faze him on Wednesday.

He carried a no-hitter into the sixth inning. Danny Espinosa broke up the no-no bid with his one-out double in the 6th. He was then gunned out at the plate by Hunter Pence on the very next at-bat, a single by Harper.

Shane Victorino hit a solo home run and drove in two, Carlos Ruiz went 3-for-4 with a run scored and Mike Fontenot added two hits, an RBI and a run scored for the Phillies.

Jonathan Papelbon pitched the 9th, giving up the Nationals only run on an Adam LaRoche solo home run.

Hamels allowed only three more hits, pitching eight scoreless and striking out eight while walking three and is now 7-0 over his past nine starts.