Do Something Ruben, Anything- Just Don’t Screw Up 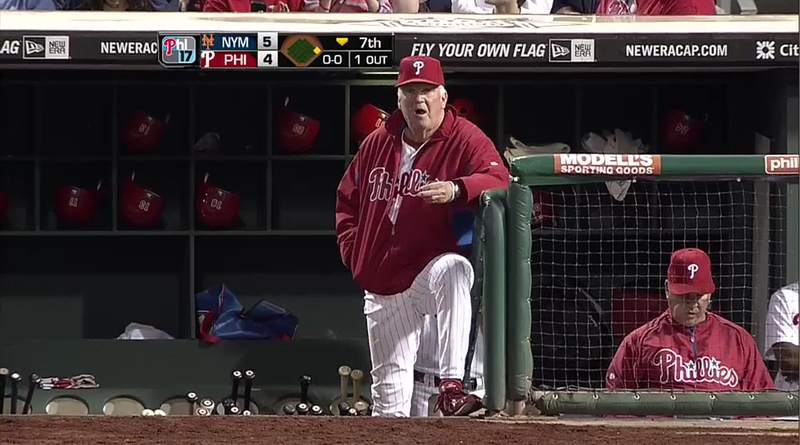 I've spent the last month and a half saying these Phillies will be fine. Truth be told, why wouldn't you believe that after five years of winning? Their best two players are out, they have shown a willingness to do what it takes, why not believe in them?

Because I've watched them.

I have zero worries about the other teams in this division, save for the Braves, putting together a full season that is so good that we can't catch them, and at minimum make the playoffs. Sorry, i'm not impressed. My problem is, this team sucks. They're not fun, not interesting, and not winning. They're not good right now.

The starters have been a mixed bag- Hamels has been great, Worley and Blanton good, Doc disappointing, Cliff hurt, and Kendrick's Kendrick. The bullpen stinks after Papelbon- they have three set-up men who were all question marks to begin with (Bastardo, Contreras, and Qualls), none of which are effective. The line-up has stunk, particularly after the second inning, and the team's "stars" (Pence, Victorino, Rollins, Polanco) have not done enough to make up for Howard and Utley, and seem to get worse in the late innings. All of this, and bench has been depleted, because those guys are starting now. Sure, Ty Wigginton has been alright- but that's not going to win you the division.

How long can this go on? How long can Ruben let it? Sure, Utley and Howard will be back- in a few weeks. How far back will they be? Ten games? More? They can't win a game that the starting pitcher isn't great, and goes eight innings. Some fans will say call up Dom Brown, others will say trade for a big bat with whatever prospects are left, some will say fire Charlie- I'm not sure any of those is the answer. Brown does belong up, but he's not playing like it. I hate the idea of trading prospects for one player who may not change much. Charlie? C'mon, he doesn't have much.

I do think it's time to shake up things. Trade a regular? Trade one of the lower end starters? At least in these scenarios they could bring in several parts- maybe some bullpen help? It's time for Ruben to do something- anything- just not something stupid.