Doc Gets The Call In Atlanta, Offense Hopes To Back Him Up 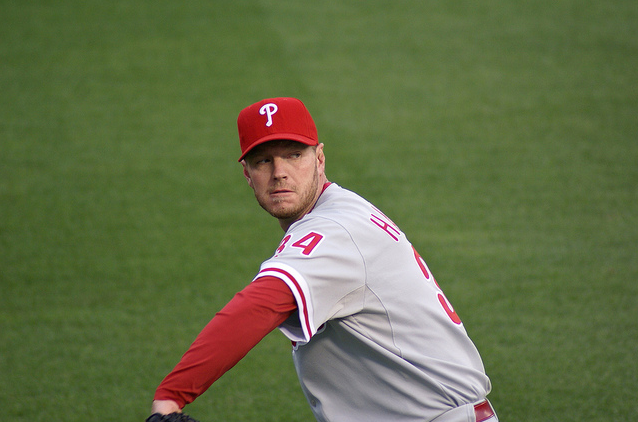 The Phillies are coming off of a 4-2 series-opener win over the Braves last night, their second consecutive win. They were unable to give Cole Hamels enough runs to give him the win, but did however manage a way to find victory last night.

Tonight, Roy Halladay (3-2, 1.95 ERA) will aim to get back on the winning track as he takes on the Braves for the first time this season. Doc is coming off of two consecutive losses, his first losing streak in nearly a year. Despite strong outings allowing less than four runs per game, Halladay was not backed up by his offense. Given just two offensive runs in those two games, Halladay has taken tough and unnecessary losses. Tonight, with a Phillies lineup that has been hitting the ball recently, he hopes to get back into the groove of winning. In his career against the Braves, Halladay is 4-1 with  a 1.78 ERA.

The Braves will send out Tommy Hanson (3-2, 3.00 ERA) in an effort to even up the series. Hanson is coming off of a strong six-inning winning effort where he allowed one run on six hits against the Pirates. Hanson has lasted at least six innings in three consecutive starts and allowed two runs or fewer in his past two starts. In his career, Hanson is 1-2 with a 2.23 ERA against the Phillies.

In other news: David Herndon, who went on the DL yesterday, has been shut down for the next three weeks. Herndon's been diagnosed with a flexor pronator strain and as of now is not a candidate for surgery.

Tonight's lineup is the same lineup from last night. Let's see what they can do against Hanson tonight.