Halladay Fans 10 in 2-1 Loss Against Padres; Galvis Drives in Only Run of the Night for Phils 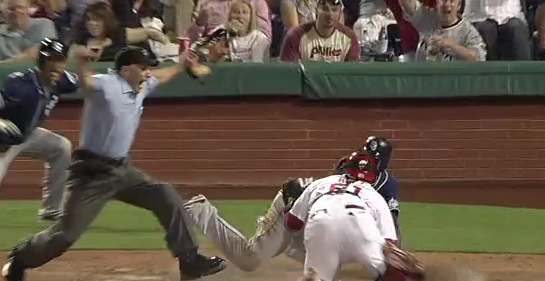 Roy Halladay won his first three decisions of the season, his third win coming on April 16. That was also his last win. The Phillies flat-out do not score runs for Doc. Unfortunately, this pattern would continue as Halladay received the loss.

Freddy Galvis drove in the first run of this game in the bottom of the second. After John Mayberry hit a double, Galvis followed with an RBI double, putting the Phils up 1-0.

In the top of the third, Will Venable hit an RBI double of his own to right field, scoring Jason Bartlett. Tied game.

This game was mostly all pitching. Roy Halladay had struck out 10 batters by the seventh inning, until hitting some trouble. With one out, Jesus Guzman hit a sacrifice fly to right field, allowing Cameron Maybin to score from third. 2-1 Padres.

The Phillies could have blown this game wide open in the bottom of the seventh. With one out and two men in scoring position, Shane Victorino (3-3 at the time) was intentionally walked to get to Hunter Pence. Pence popped out on the first pitch, followed by a groundout from Ty Wigginton. Missed their chance.

Chad Qualls had two men on the basepaths but made it out of the inning without allowing a run to score. This game was still very much winnable for the Phils.

After a scoreless (and hitless) bottom of the eighth, Jonathan Papelbon pitched a scoreless ninth with the Padres up 2-1. With Jimmy Rollins on third base and two outs in the bottom of the inning, Hunter Pence struck out swinging to end the ball game.

Cole Hamels will make his return from his suspension tomorrow at 1:35 in the finale of this series which will be the rubber match. Also, Placido Polanco is at 1,999 career hits. Hopefully we will see #2,000 tomorrow!