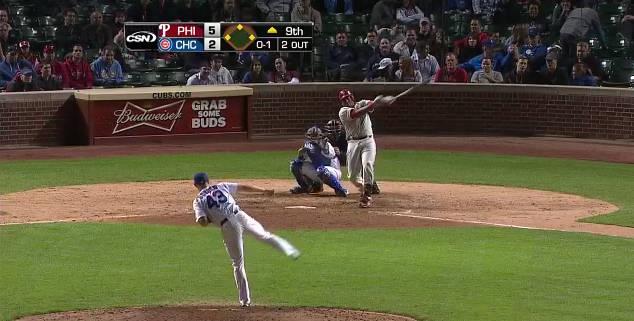 Kyle Kendrick took the mound in Chicago tonight in place of Vance Worley, who was placed on the 15-day disabled list today with elbow soreness. This might sound like a trainwreck waiting to happen, but Kyle pitched surprisingly well considering he started on short notice. The Phillies' offense was downright incredible tonight, including a surprising debut from Hector Luna.

Freddy Galvis drove in the first run of the game against Matt Garza in the top of the second. With Carlos Ruiz in scoring position, Freddy doubled him in for his 16th RBI on the season.

A huge yet simple error from Juan Pierre would give the Cubs a lead in the fourth. After a 13-pitch at bat from Bryan LaHair, he finally popped up to left field– only to have Juan Pierre drop the ball. Alfonso Soriano took Kendrick deep to left field afterwards, making it a 2-1 game. 75 pitches from Kyle at this point.

In the top of the fifth, Kendrick helped his own case with a single to right field, his first hit of the year. After a double from Juan Pierre, Shane Victorino hit an infield single (replay showed he was out) to score Kendrick. All even 2-2.

Kendrick pitched a fantastic six innings tonight at Wrigley. He allowed just two runs (one earned) on three hits, walking none and striking out four. 93 pitches total, 65 for strikes.

Placido Polanco was taken out of the game prior to the bottom of the seventh after limping off the field. It was later reported that Polanco suffered a left knee bruise. Ty Wigginton took over at first base while Mike Fontenot replaced Polly.

Jose Contreras entered this ball game in relief of Kyle Kendrick. He pitched a 1-2-3 inning, rare for Contreras, eh?

In the top of the eighth, Carlos Ruiz sent a ball to the left field stands for a solo home run. It was his eighth of the year, and it gave the Phillies a 3-2 lead over the Cubs. Antonio Bastardo pitched a perfect inning, sending the game over to the Phillies' lineup and Jonathan Papelbon.

The Phillies loaded the bases in the top of the ninth on a double from Galvis, a hit batter in Fontenot, and a walk to Jimmy Rollins. Ty Wigginton drove in Galvis and Fontenot with a single into right field, giving the Phils a 5-2 lead. After two quick pop-ups, Carlos Ruiz was intentionally walked to load the bases for Hector Luna. In his Phillies debut with two outs, the Big Tuna hit a moon shot to left field. Grand slam in his first at bat. 9-2 Phils.

Raul Valdes also made his Phillies debut tonight. In the bottom of the ninth, he pitched a perfect inning. All around great effort from everyone tonight in the Phillies' fourth consecutive win.

So, the Phillies are back to .500 baseball, and will hopefully carry this offense over to tomorrow night's game in Chicago, the last of this two-game series. Roy Halladay will take the hill for the Phils.