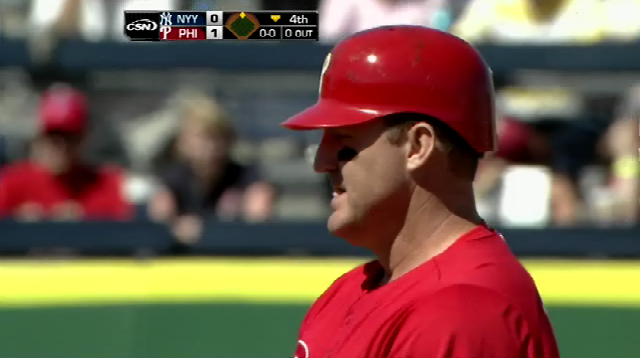 I'm not conspiracy theorist, but I am not surprised that Jim Thome just may return from the disabled list in time for the Phillies' trip to Baltimore, Minnesota, and Toronto, when the Phillies will need a designated hitter.

[Phillies Assistant General Manager Scott] Proefrock said it was realistic to expect Thome back when the Phillies begin a nine-game road trip against American League teams Baltimore, Minnesota, and Toronto beginning June 8. The Phillies will need a designated hitter in those games, and, if healthy, Thome will be a viable option.

I am not shocked that the Phillies have been keeping Thome out a little extra since he is very limited to only occasional starts at first base and pinch hitting.  Up until now, the Phillies stood to benefit from having someone on the roster who can play positions.

Thome played a good amount in Spring Training, getting 37 at bats and then was seldom used in the regular season for the Phillies.  In 17 spring training games, Thome hit .243 with four doubles but had an on-base percentage of .364.

But in the regular season Thome just hit .111 (2 for 18) in limited action.  Despite playing first base a number of times in the preseason, Charlie Manuel seemed to hardly put Thome's name onto the lineup card.

I hope when Thome returns Manuel is less shy.  Of the nine games in American League cities, I would hope that Thome serves at DH for no less than five of them.   After this, I would like to see Thome play first base at least one day a week.   Thome would at the very least give the Phillies professional at bats from the cleanup or fifth spot.  PItchers would still fear Thome and he would take pitches instead of swinging at balls at his head.  Why not - what is the risk?

The obvious risk is that Thome experience soreness in his back once again.  Should Thome's back be sore sometime in July or August another disabled list stint would not be out of the question.  This could get the Phillies through to the roster expansion of September.  When (if) the Phillies make the playoffs, Thome would be there for that big pinch-hit bat and to serve as a World Series designated hitter, if I am not reaching too much.