Is Shane Victorino Helping His Contract Hopes? Probably Not. 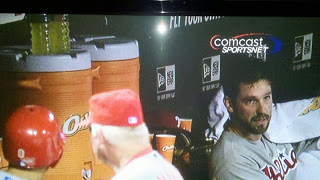 Last night, Cliff Lee and Shane Victorino had an altercation in the dugout. In the grand scheme of things, it's not a big deal, right? Happens all the time. Nobody had anything to say about it after the game.

The problem isn't the argument. The problem is, one of the Phillies' strengths has been their clubhouse chemistry. This is a team that seemed unflappable, even to a fault. Suddenly in the last week we've seen Doc say he and his teammates are pressing, and now a player fight. Ultimately, the Phillies haven't lost since Doc talked, and they won the game with the fight, but this is not good.

Shane Victorino is a free agent after this season. He is 31 years old, and is a couple time All-Star. After a slow start, Shane is coming on now: he's up to .263, with 13 stolen bases, 6 homers, a .759 OPS, and 22 runs scored. He's hit all over the line-up, and he's probably a top two or three offensive player in this line-up.

He's also someone who will want a good contract. He makes $9.5 million this year. He's probably going to fetch both a raise and a five year deal. Mind you, the Phillies are also trying to negotiate what is likely to be a monster deal with Cole Hamels. Assuming there's no way Victorino signs for less than five years at sixty million, and Hamels is likely to require seven years and $140 million, can they both be had? Clearly, as great as Shane has been as a Phillie, Cole is a 28 year old ace, something you can't replace. If you're thinking three years down the line, Cole is the bigger piece to this team.

Which brings me to the bad timing for this incident for Shane. Chase Utley reportedly worked out in left field this week. Dom Brown has begun playing center. If you're thinking about 2013, that gives the Phillies the option of opening next year with Utley, Brown, and Pence across, Mayberry as a fourth outfielder, and the ability to at least try and move on without Shane. In other words, as this fight is happening, other things are too. You just wonder, and hope for his sake, that he's not speeding up his exit from Philly by getting into this fight.