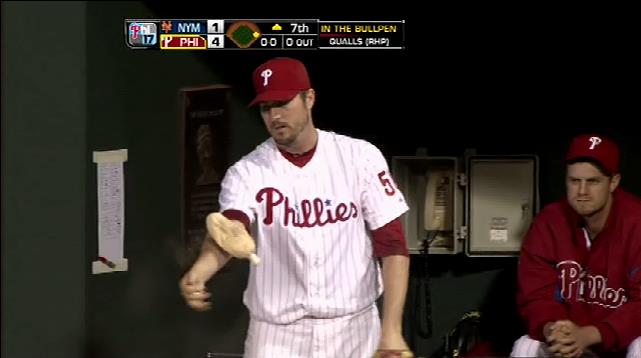 Yesterday afternoon we witnessed once again the Phillies' major problem this season: starter has a dominant/decent/good start, and the bullpen quickly coughs up the 1-2 run lead that the team has.  Yesterday's game was both a cause for frustration and a cause for hope.

With their dominant closer unavailable, the Phillies had to turn to Chad Qualls.  Why Qualls? Well, who else?   The other options in the bullpen to come in for a save were:

Kyle Kendrick could not pitch because he was going to have to start tonight for an ailing Vance Worley.  Antonio Bastardo and Jonathan Papelbon were unavailable due to frequent use in recent days.

Ouch.  Those are not a lot of options.

As it turns out, Diekman ended up being the savior.  Too often this season the Phillies have had to put young pitchers into situations in which they did not belong.  Michael Schwimer was part of one bullpen meltdown where he inherited a Jose Contreras mess with no outs.  It is not fair to put that onto a guy like Schwimer, and it was not fair to put last night's runners on 2nd and 3rd in a tie game in the hands of Jake Diekman.

Jose Contreras has a 9.00 ERA in his 10 appearances with a whip of 1.88.  Chad Qualls has a lower ERA at 4.05 but he has a WHIP of 1.80.  When you are being called upon in the late innings to get between 1-3 outs, you cannot be allowing nearly two runners on base per appearance.

Joe Savery is back.  Michael Schwimer was sent down to AAA, after some rocky outings.   The problem is, Savery and Schwimer have nothing left to prove at AAA.   Schwimer had a 1.04 ERA prior to his initial callup and is now down to 0.77 with his recent outings.  Savery sits at a 1.59 ERA.

Veteran bullpen arms should not be allowing this many baserunners, and when they do, they should not be turned over to the likes of the Saverys or Schwimers.  I would much rather give these guys the ball for a clean inning that put them into the mess an aging veteran makes.

So, I would cut Jose Contreras immediately.  Chad Qualls gets a pass for now; what I do know for sure is that both of them cannot be in the same bullpen.

Young arms such as Diekman and Schwimer deserve the opportunities to pitch especially when veteran arms will just fail anyway.  Diekman gave fans a reason to be hopeful.