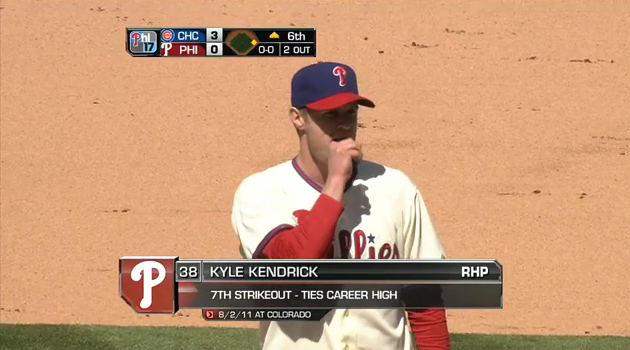 Vance Worley (3-2, 3.07 ERA) was scheduled to start the series opener tonight in Chicago against the Cubs, but his elbow felt otherwise. This afternoon, the Phillies placed Worley on the 15-day DL with right elbow sorness. With the Phillies riding a current three-game winning streak, this is not news the Phillies want to hear. Losing Worley in the rotation, just a few starts removed from Cliff Lee coming back strains the rotation as well as the bullpen. With Worley headed to the DL, he becomes the 9th Phillie to be put on the DL this season, and it's only May.

Kendrick has pitched against the Cubs this season. Back on April 29, Kendrick tossed six innings allowing two earned runs on five hits while striking out a season-high 7 Cubs. Kendrick took the loss as his offense wasn't able to produce runs against Matt Garza. In his career, Kendrick is 0-1 with a 1.80 ERA in ten innings against the Cubbies.

The Cubs will send out Matt Garza (2-1, 2.56 ERA) who is attempting to shut down the Phillies for the second time this season. Garza is making his second start since being scratched with the flu. He had trouble finding his groove against the Brewers as he lasted just five innings allowing one earned run on three hits and five walks. Back on April 29, Garza tossed seven one-hit, shutout innings against the Phillies to earn the win. In his career, Garza is 2-1 with an 0.96 ERA against the Phils.

Kyle Kendrick needs to look out for Chicago's Bryan LaHair. LaHair is on a tear right now and has reached base safely in a team-high 32 straight games. LaHair is definitely the hottest hitter on the club, boasting a .352 average, 10 home runs and 21 RBI.

The Phils got off lucky yesterday. It's pretty sad that the bullpen couldn't close it out with a 3-1 lead to give Cliff his first win of the year, but there's nothing we can do about that now. What needs to be done now is a shaking up of the bullpen.