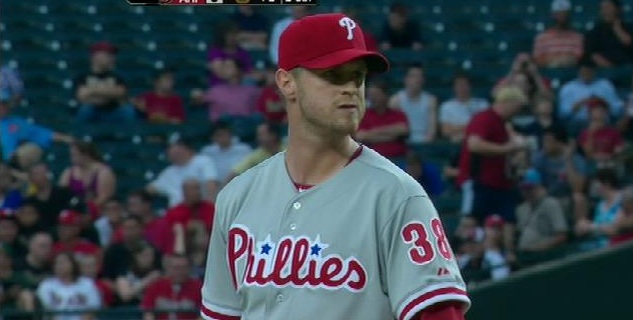 It's all about Kyle Rodney Kendrick. Kyle pitched an absolute gem of a ball game tonight, shutting out the Cardinals in a complete game effort. By a show of hands, who guessed Kyle would have more wins by May 26th than Cliff Lee? If your hand is up, put it back down, you're a filthy liar.

The first run of the game would come in the fourth inning. Hunter Pence scored on a double to deep right center ripped by Shane Victorino.

In the sixth inning, the bases were loaded with one out for John Mayberry, Jr. who doubled to left field right down the line, scoring Hunter Pence and Placido Polanco. Freddy Galvis grounded out to shortstop to follow, which scored Shane Victorino.

Meanwhile, Kyle Kendrick was completely dominating the Cardinals. Say what you want about Kyle, but he has been surprisingly spot-on as a spot starter.

And that's your ball game. Kyle was brilliant, and the Phillies scored some runs. Kyle's final line: 9 IP, 7 H, 0 ER, 0 BB, 4 K, 94 pitches. This was Kyle's first complete game shutout of his career.

Cole Hamels will pitch tomorrow afternoon at 2:15 in what will hopefully be a four-game sweep of the defending 2011 World Champions.