Lee still winless, but Pence walks off with blast 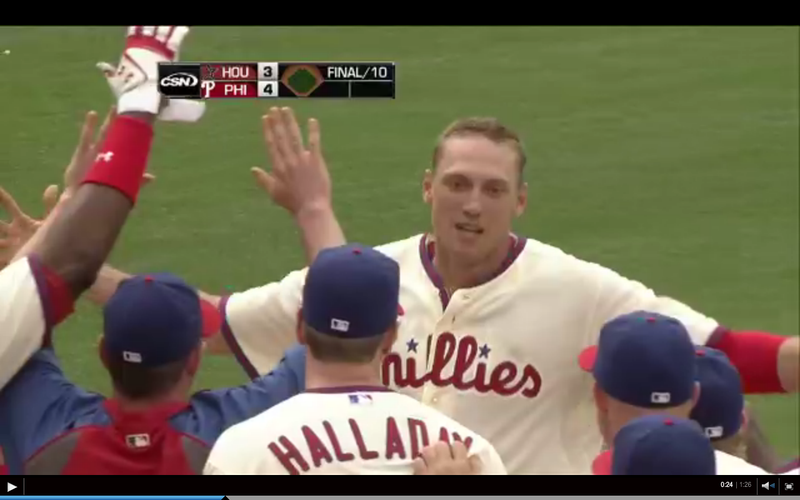 Baseball is sometimes a game of redemption. For the Phillies bullpen, things just couldn't seem to get any worse than the Mets series last week. And then the ninth inning hit today.

When players make an error, the baseball gods sometimes have a funny way of making it up to them. In the end, a horrendous play for Hunter Pence turned out to have no bearing on the ballgame other than the length, as the Phillies still managed to finish off a sweep of the Astros.

After failing to score a run in the first even after getting a lead-off double by Jimmy Rollins, the Phillies gave Lee a lead in the second. With two outs, Brian Schneider connected on one and sent it into the seats in right for his first home run of the season, a two-run shot.

The Phillies would stay put at that margin until the sixth, when Hunter Pence, who was just three for his last 29 at-bats, homered to right to extend the lead. It was his eighth home run of the season.

Lee made his only mistake of the game in the top of the seventh, as Matt Downs blasted a solo shot to lead off the inning.

But Lee worked his way through that inning and one more, lasting eight innings allowing one run on five hits, walking one and striking out 10.

There were a few fireworks before Lee exited the game though. Lee's 10th strikeout didn't result in a recorded out, as a wild pitch got away from Schneider allowing Jason Castro to reach base. Charlie Manuel was frustrated with home plate umpire Bob Davidson in the way he made strikeout call, as it appeared he blocked Schneider from retrieving the loose ball. Davidson promptly ejected Manuel, which led to one of Charlie's better arguments.

In the end, the Phillies needed only one inning out of their bullpen. They called on Chad Qualls in a save situation with Jonathan Papelbon unavailable. Qualls couldn't stop the bullpen's bleeding that has been on this homestand.

Qualls allowed a lead-off double to open the inning. Carlos Lee drove home a run on an RBI single with one out. Then with two outs, a single into right field by J.D. Martinez was not going to be enough to score Brian Bogusevic, but Hunter Pence bobbled the ball trying to throw it in, allowing Bogusevic to score and tie the game. Qualls would allow another double before exiting the game.

Jake Diekman then came on in his major-league debut needing an out to keep the game tied. He struck out Marwin Gonzalez with a nice display of a fastball with zip and a devastating slider. More importantly, he kept the game tied to give the Phillies a chance to win it in the ninth.

After a scoreless ninth, Diekman pitched a scoreless 10th as well, striking out two in the inning. Most importantly, he left the game tied so only one run would need. Cue the man that needed redemption the most, Hunter Pence. He had two hits in his last two at-bats after slumping mightily. He capped off the day by lining a solo home run out to left to win the ballgame for the Phillies, 4-3, in 10 innings.

There is no player on this roster I feel sorrier for than Cliff Lee. What does this guy have to do to get a win? After pitching brilliantly for eight innings, the bullpen, asked to pitch just one inning, couldn't do it.

Credit the rookie Jake Diekman for coming into a pressure-packed situation and finishing the job. He displayed a nice combination of his pitches and looks like a formidable pitcher for this shaky bullpen.

Additionally, several players are starting to find there offensive form. A game like this could jumpstart Pence from the slump he was in. Also factor in multi-hit games for Brian Schneider, Jimmy Rollins and Placido Polanco.

The bottom line today is that a win is a win. So even though it came in rather ugly fashion, it still gets the Phillies on a winning streak and puts them one game below .500 for the first time in a while.

Now, the Phillies travel to Chicago to face the Cubs in a quick two-game series before returning home for another homestand.