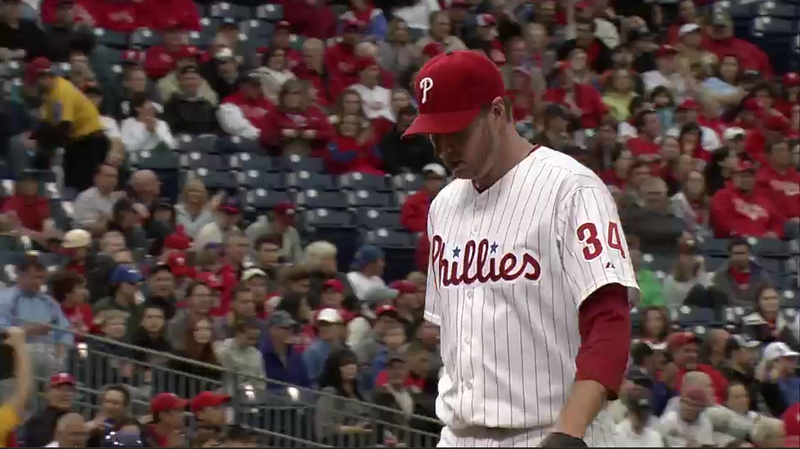 When Roy Halladay has it, he has it. And, oh, did he have it tonight. He was looking for a win after a brutal outing last Wednesday night in Atlanta. He allowed eight earned runs on twelve hits in five and a third innings pitched. Very, very rare for Doc to pitch a bad game. Unfortunately, his offense in front of him in the lineup would fail to back him up once more, and this was not a good game to come back with.

Jimmy Rollins led off this game with arguably the greatest at-bat of the season for him. He worked a 3-2 count and followed with a triple to right field. He scored on a sacrifice fly from John Mayberry, Jr. who hit in the two-hole tonight.

In the bottom of the second, Placido Polanco sent Carlos Ruiz home on a double to deep, deep left-center field. 2-0 Phillies.

Doc Halladay was flying through this Mets lineup through five innings before hitting some trouble. Andres Torres drew the first walk from Halladay in the sixth, followed by a single from Kirk Nieuwenhuis. David Wright doubled to bring them both home, tying the game at 2-2.

Roy was backed up by some incredible defense tonight. John Mayberry made two diving plays in left field, while Freddy Galvis was flashing leather all night at second base. If there's one thing this team isn't lacking, it's superb defense in the middle infield. Unless Pete Orr is at second… Sorry, Pete.

The Phils had a great chance to score a run or two in the seventh with the bases loaded and one out, but Hunter Pence swings at every ball thrown his way, which resulted in a double play. He was initially called safe at first, but the play was later ruled a double play after the second base ump ruled interference on the second baseman by Shane Victorino.

Halladay pitched seven strong innings tonight against the Mets. His line: 5 H, 2 ER, 1 BB, 7 K, 107 pitches (68 for strikes). Much better then his last outing. Antonio Bastardo came in for the eighth to pitch against the tough lefties of the Mets' lineup. He did just that, ending the inning on a beautiful double play. No harm done.

The Phils had two men on for Freddy Galvis who hit into a fielder's choice with one out. Ty Wigginton was sent home but was tagged out by catcher Josh Thole who took Wigginton's shoulder to his face. He remained down for a few moments before leaving the game. Hoping he's not too banged up. Erik Kratz ended the inning on a strikeout. Still a 2-2 game.

Jonathan Papelbon pitched the ninth inning of a tied game in his first appearance since Tuesday in Atlanta. In chronological order, he struck out Murphy, walked Davis, struck out Turner (looking good so far, eh?), allowed a double to Nickeas, then a three-run home run to Jordany Valdespin. It was Jordany's first major league hit. 5-2 Mets.

The Phillies could not come back in the bottom of the inning and went on to lose, 5-2. Game two will be tomorrow night at 7:05. Joe Blanton takes the mound for the Phils.