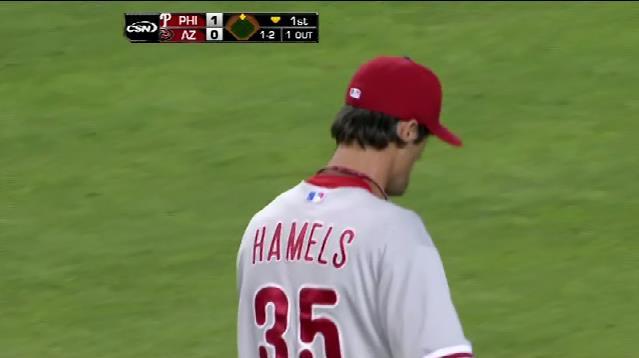 Happy Mother's day to all you mothers out there! We here at Philliedelphia appreciate all the hard work you've done in your lives. You've made us people who we are today and for that we thank you.

This afternoon, Cole Hamels (4-1, 2.45 ERA), fresh off of his suspension, will make his eighth start of the season as he takes on the Padres in the series finale. Hamels received a five game suspension after admitting the fact that he intentionally threw at Washington Nationals' rookie Bryce Harper. Five games wasn't necessarily drastic for Hamels as he wouldn't really miss a start. All that would happen is that he would get six days rest and would swap in the rotation with Roy Halladay. Not a big deal.

In Hamels' last start, he tossed 8 innings of one-run ball against the Nats to earn his fourth win of the year. Hamels struck out eight and walked one. Hamels is sporting the best record of any Phillies starting pitcher this year and he's been given enough run support to manage out four wins. Unlike Roy Halladay, who has been screwed in his past five starts. Hopefully the Phils can bang out enough runs to give Hamels the edge today as well as helping out Halladay in future games. In his career, Hamels has a 7-2 record with a 2.22 ERA in 81 IP against the Padres.

The Phillies will take on Padres' lefty Jeff Suppan (2-0, 0.90 ERA) today as he makes his third start of the season. Suppan tossed five innings of one-run ball against the Colorado Rockies in his last start. Suppan struck out one while walking two. Suppan doesn't have a great track record against the Phillies in his career as he holds a 2-6 record with a 6.63 ERA against them.

The "meeting" that Charlie Manuel had with the club a couple of days ago must have gone out the window last night, but today it must be here. In the last series the Phillies and Padres played, the series was split 2-2 and if the Phillies lose a three-game series to the National League's worst Padres (12-22) at home. There is going to be a lot of questions that need to be addressed.