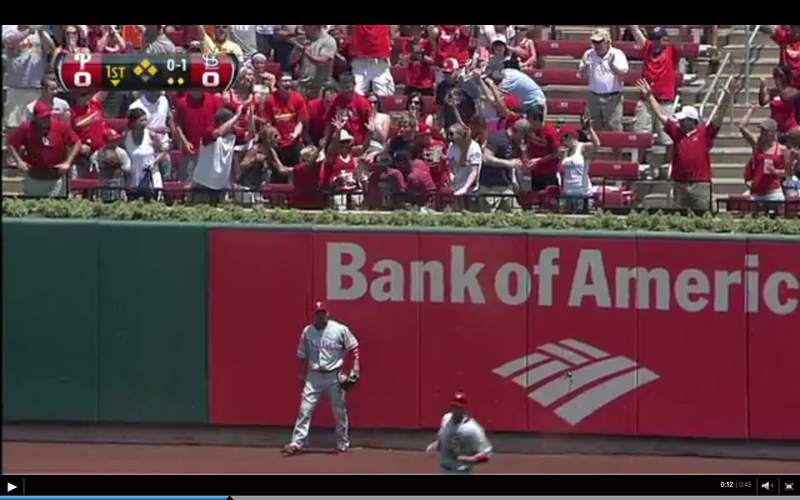 As far as first innings go, you couldn't draw up more of a disaster. A nearly insurmountable lead, another rough start for a top-of-the-line pitcher and the opposing ace on the mound. It was clear today wasn't going to be the Phillies day.

The Cardinals took all the momentum in one swing, and the Phillies got more news they didn't need to hear. It was all part of a frustrating day all around for the Phillies who saw their winning streak end.

Roy Halladay was making a start in the series finale with the chance to win. Money in the bank, right? This season, something is different. We may learn what that something is sooner rather than later. Unfortunately, it was too late to save this game.

Halladay allowed a pair of one-out singles to Skip Schumaker and Matt Holliday before retiring Carlos Beltran for the second out. But after walking David Freese to extend the inning, Yadier Molina got a hold of one and sent it into the seats in center for a grand slam.

Halladay went on to pitch a perfect second inning, but left immediately after that with what the Phillies said was right shoulder soreness. No MRI was immediately scheduled and he will be re-evaluated in the coming days.

The Phillies did trim the lead in the third with an RBI single by Juan Pierre. But that was as close as they would get.

After pitching two scoreless innings, Joe Savery got into trouble in the fifth. Two baserunners were charged to his line before Chad Qualls entered the game. He allowed a three-run home run to Beltran in the fifth and then a solo shot to Matt Adams in the sixth.

The Phillies added an eighth-inning run on a fielder's choice and another RBI single by Pierre in the ninth but saw their four-game winning streak snapped with an 8-3 loss to the Cardinals.

Forget about the game. There is another one tomorrow and after four straight wins, the Phillies may have been due for one like this. The real story is Roy Halladay. Whether this soreness puts him on the DL or not doesn't matter. It is clear that something is wrong with Halladay. It may not be physically noticeable, as in velocity or pitch selection, but it is clear in location, movement, and other aspects to fooling a hitter.

Hitters aren't being fooled by Halladay this year, thus making him just another hittable pitcher.

For now, wait on official news on Halladay's health from the Phillies and take the loss for what it is. Tomorrow marks a brand new series with the Mets. Although, play like this won't cut it against division opponents where there is still sizable ground to be made up.