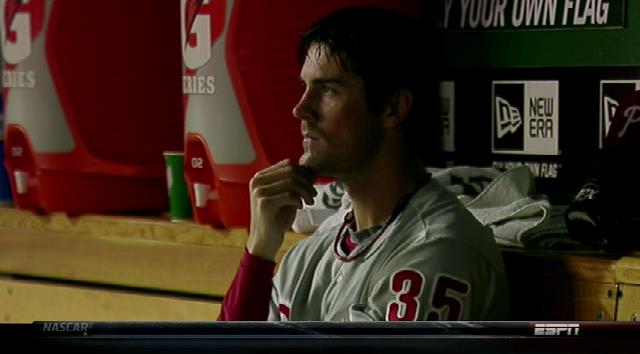 It's not easy listening to an ESPN broadcast in which they frequently mention the "first place Nationals and last place Phillies." But, it is easy to enjoy a defeat of this Nationals team, considering they took the first two games.

Prior to the start of the game, ESPN sent out a text alert to those who are subscribed. It read "Watch Bryce Harper and the Nationals take on the Phillies; tune to ESPN." This message basically implied Harper is the new face of the Nats, and the Phillies are just the Phillies. Thanks, ESPN.

Well, Harper started off this game in dramatic fashion. The first pitch he saw from Cole Hamels drilled him straight in the back. After Jayson Werth hit a single, sending Harper to third, Harper stole home on a pick-off attempt of Jayson Werth at first base. 1-0 Nationals.

To make this situation more interesting, Cole Hamels was hit in the foot by starting pitcher Jordan Zimmermann. Both sides were warned at this point. I smell a rivalry cooking up, especially with the Nats' newfound ego and aggression.

Hunter Pence went deep to left field in the fourth inning to give the Phillies a 2-1 lead. The Phils previously were not making Zimmermann work at all, in fact, he had thrown just 30 pitches through three innings.

In the same inning, Laynce Nix scored on a single from Placido Polanco, putting the Phils up 3-1. Now they were making Zimmermann work, he threw 29 pitches in the fourth inning.

Jayson Werth injured his left wrist in the sixth inning while trying to catch a fly ball. He dove on his knees for it, and his wrist bent backwards. He injured the same wrist seven years ago and he believed at the time that he would never play baseball again. Hoping for good news on the wrist, or nothing career or season-ending. Apparently, Jayson couldn't even take his glove off while walking to the clubhouse. Not good.

This, too is unbelievable: The Phillies had the bases loaded with nobody out in the seventh and followed with a line out, a fly out, then a strike out.

However, they would score a run in the ninth. Juan Pierre hit an RBI double, sending Rollins home. Shane Victorino would send Pierre home with a triple down the right field line. With Shane on third, Hunter Pence drilled a homer to left field for the second time tonight. After Ruiz singled and Polanco doubled, Freddy Galvis hit a two-run single to center field. 9-1 Phils.

In eight innings, Hamels allowed one run on five hits, walking one and striking out eight. Awesome outing. Brian Sanches would come in for the ninth, and it wasn't a simple 1-2-3 inning.

With two men on, Roger Bernadina doubled to score Rick Ankiel. Ian Desmond hit an infield single to score Wilson Ramos, but that would be all they would get. Phillies win, 9-3.

Roy Halladay and Jon Niese will square off tomorrow night at Citizens Bank Park in the start of a three-game series.