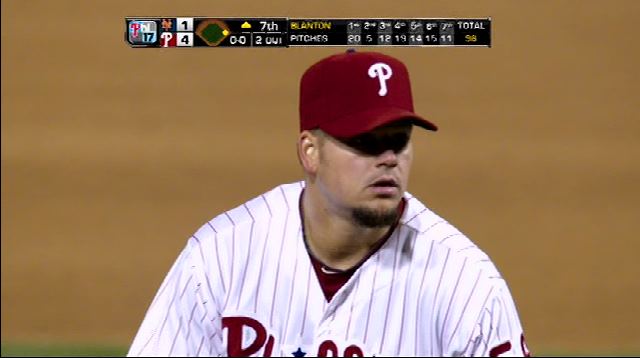 Joe Blanton brought the business tonight against the Mets, much like he did in Atlanta last Thursday when he pitched an 88-pitch complete game shutout. The Phillies were able to score runs tonight off of Miguel Batista, which they failed to do (for the most part) last night to give Roy Halladay a win. Doc received a no decision in the 5-2 loss last night. Joe would receive the same tonight after a complete bullpen meltdown.

The Phils got off to a hot start scoring four runs in the first two innings. With Juan Pierre on base in the first, Hunter Pence crushed his seventh home run of the year. John Mayberry reached on an error in the second inning and was able to score on a single from Pete Orr. Shane Victorino doubled to drive in Orr, giving his team a 4-0 lead.

The top of the fourth brought about the Mets' first hit and first run of the game. Kirk Nieuwenhuis doubled to center, followed by a walk to Lucas Duda. Daniel Murphy brought home Nieuwenhuis with an RBI single, putting the Mets on the board, 4-1.

In the seventh inning, Joe walked last night's game winner in Jordany Valdespin to start the inning. Two outs later, Andres Torres and Nieuwenhuis singled, Nieuwenhuis's hit brought home Valdespin. Blanton would be taken out at this point with Chad Qualls coming in.

Wait until you hear this one. Er, read this one.

David Wright singled to score Torres and Nieuwenhuis. But first, Wright was caught in between first and second. Pete Orr tossed the ball to third to try and get Nieuwenhuis, but completely missed his target, allowing the Mets to tie the game. Qualls out, Bastardo in. It did not get better.

Michael Schwimer came in for the ninth made matters slightly worse. After walking Mike Baxter, Andres Torres singled, followed by a sac fly from Nieuwenhuis to bring home Baxter. Joe Savery took the mound after 2/3 of an inning, and allowed an RBI single to Lucas Duda before the inning finally came to a close.

Much like last night, the Phillies could not come back in the bottom of the ninth. Silver lining: Cliff Lee comes back tomorrow.