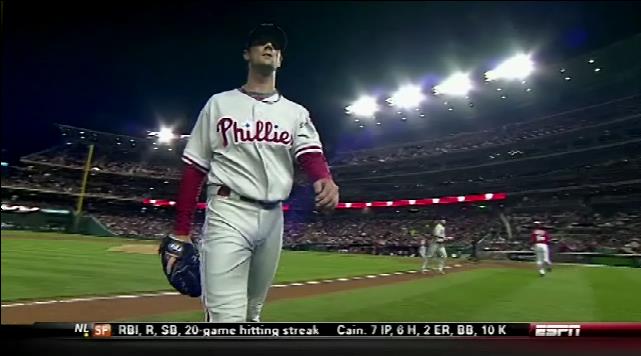 We figured that a suspension was forthcoming and showed that the last two pitchers suspended for throwing at players were each suspended five games a piece.   We formally learned that Cole Hamels got his own five-game suspension from MLB.

We wondered if Hamels would be penalized more for admitting that he threw at Harper.   Nationals GM Mike Rizzo equated the pitch with "Bounty-Gate" in the NFL in a profanity-laden tirade, but for whatever reason, things like this happen.

Now, who was the last pitcher to admit throwing at a player?  I'm not sure if he was the most recent, but Bobby Janks, of the White Sox in 2009 admitted to throwing at the Rangers' Ian Kinsler.

What did Jenks say?

"Yeah, I wanted to go in and send a message, and I think that message was sent".

The difference between the two is that the pitch actually hit Harper.  So for failing at trying to hit Kinsler, Jenks got off easy.  Hamels is more skilled at throwing so I suppose that warrants the five-game suspension.

Maybe it's one of those legal things.  "Attempted murder" – meaning you did such a bad job at trying you did not succeed – has a much lesser legal penalty.  I guess baseball too, rewards people for failing.