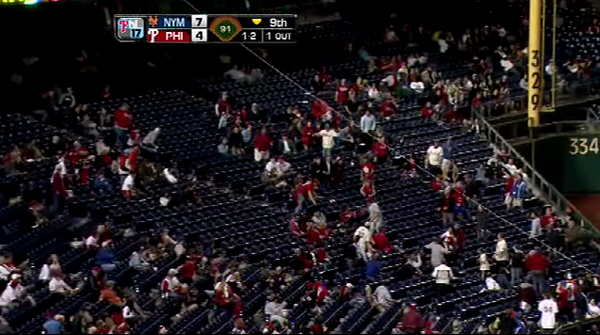 They're not just bored: they see the team's approach to the game and are not excited in the absolute least.   See the above picture.  When in the last five years did Phillies fans think the team had absolutely no chance to come back from down three runs in the 9th?

It began in the bottom of the 6th inning.  The Phillies knocked out the Mets ancient starter Miguel Batista with two runners in scoring position (2nd and 3rd) with one out.  The Mets called for Manny Acosta.  The Phillies responded by batting Joe Blanton and then Jimmy Rollins, neither of whom were any help.

Charlie Manuel so wanted Joe Blanton to get them through the seventh inning.  But, Big Joe allowed a run and had two baserunners on and he had to pull him.  Then further hell broke loose, along with the fans.  Once AAA infielder threw away a pickoff throw and the Phillies lost the lead in the 7th inning.   With the score 5-4, Phillies fans knew it was the end.

Something needs to happen to make things exciting.  I do not want to see anymore of the following:

How about this lineup, if they won't bring anyone exciting in:

Missed Opportunities.  Yeah, these were part of my joke slideshow, but they were very available options that are still better than the crap we have to watch every night.

Raul Ibañez is hitting .267 with 5 home runs and 16 RBI in limited action.  Do you think that would be better than what the Phillies got out of left field?

Brandon Inge has 9 RBI in his 7 games for the Oakland Athletics.  Charlie Manuel has given up on Freddy Galvis' bat, or so it would appear.

It's only five games, but Bobby Abreu is hitting .300 for the Dodgers and actually seen some pitches.