Eagles Flyers Phillies Sixers About Us Write For Us
Oh Em Gee: Cliff Lee, Dillon Gee Pitch in Mets-Phillies Rubber Match at Citi Field
Jamie Moyer Designated for Assignment By Colorado Rockies; Is That it for Jamie? 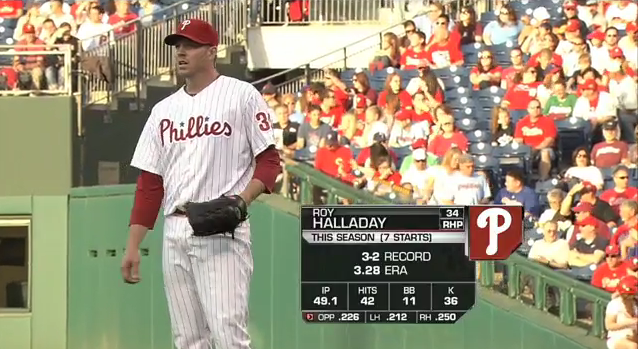 I don't know if this is something to be worried or excited about.

According to MLB's Todd Zolecki, Phillies' ace Roy Halladay has gotten a second opinion on his shoulder injury this afternoon.

Halladay met with Dr. David Altchek today to receive a second opinion on his grade 1 - grade 2 strained lat muscle that landed him on the DL yesterday. It's not surprising that he would get a second opinion, especially from the go-to guy for shoulder injuries.

Halladay will hold a press conference on Friday after meeting with more doctors. Hopefully it's good news and he'll be back quicker than expected. Six to eight weeks is too long for me. I'm already going through Doc withdrawl.

Remember how then-Cardinal Albert Pujols broke his wrist in June of last year and wasn't slated to be back in action until August? Yeah. Remember how he came back 2 weeks later? Yeah. Although this is a muscle issue and not a fracture or bone issue, it's a totally different healing process. I'm just making the assumption that Doc could possibly be back quicker than expected, but it's the Phillies' best interest to take it slow with their ace.

We'll keep you updated on any word of this matter.