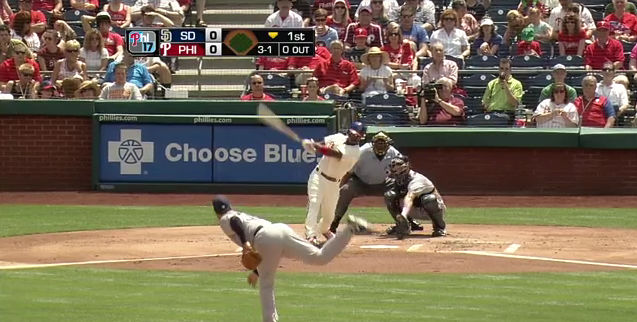 Cole Hamels' suspension came to a close today in his first start back. He didn't miss a start, instead, he switched places in the rotation with Roy Halladay who pitched tremendously last night. This afternoon's game was the rubber match of the series, and what a great game it was on Mother's Day!

Jimmy Rollins led off this game with his 38th career lead-off home run, putting the Phils on the board.

In the bottom of the second, Brian Schneider singled in Ty Wigginton, giving the Phils a 2-0 lead. Chris Denorfia scored in the top of the third on a groundout from Jesus Guzman, putting the Padres on the board. 2-1.

Brian Schneider scored the third run of the game for the Phils thanks to a double from Juan Pierre in the fifth inning. Both Schneider and Pierre had multi-hit games.

Placido Polanco came in as a pinch hitter for Hamels after Carlos Ruiz took over for Schneider. With two men on in the seventh, Placido Polanco was robbed of his 2,000th hit over at third base. It'll have to wait until tomorrow, hopefully.

Jose Contreras pitched 2/3 of an inning allowing a run on two hits before Antonio Bastardo closed the eighth inning for him. 3-2 Phils.

Jonathan Papelbon came in for the ninth in a save situation and pitched a perfect ninth inning, striking out two. Phillies win, 3-2!

Monday and Tuesday will bring about a two-game series at home with the Houston Astros. Looking like Joe Blanton tomorrow at 7:05, and Cliff Lee Tuesday at 1:05.

Also, Philliedelphia would like to wish a very happy Mother's Day to all of the moms out there! We love you, moms!