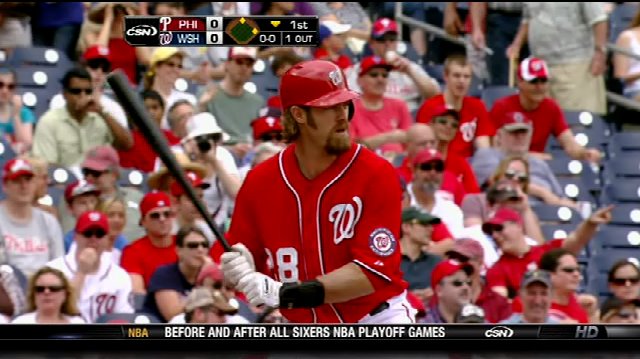 Let me get this out of the way.

In the summer of 2010, when there was a rumor that the Phillies may trade Jayson Werth, I was on the record wanting him out the door. B.J. Upton and Wade Davis worked for me. Get Werth's inconsistencies out of town for some value, and don't let the door hit him on the way out.

I just never warmed to Werth the way that other Phillies fans did. Beard or not. I considered him a product of hitting behind Utley and Howard, not a real star, and got annoyed with some of his shortcomings, fair or not. That's only got worse in the time since he left. To me, he died on this day:

He didn't die for leaving, he died to me as a player because well, I didn't care about him anyway. I liked Abreu more before him, and I like Pence more after him. With that all said, he was a good player in Philadelphia, not a bad one. He was one of the best bargains of the Gillick era. Now though, in DC, it's Werth vs. Philadelphia, and all of it's fans. I never blamed him for signing a $126 million deal with a different team, even a crappy one, in division. Not for a minute. That's simply way more money than he deserved, and he would have been stupid to pass on it. A spade's a spade, and in this case, a deal's a deal. I didn't think he was worth $75 million from us, he should take $126 from them, no problem.

Things have soured since then though, and frankly, Werth's rant against the fans of Philadelphia sounds like nothing but a bitter, declining, mediocre player, pissed that a couple of drunk fans from his former team heckled him on national TV when he was hurt. I'll be the first to admit I've went overboard with my anti-Werth rantings in the past, and i'm not going to defend people cheering in the ballpark. That's not all the Phillies fans out there though, and Werth knows it.

Frankly, what does he even care. He's making $18 million this year. They are just stupid drunks. He knows better, his little feelings are hurt though. His feelings are hurt because Ruben gave "his" money to Cliff Lee, a much better, more valuable player. Since Jayson didn't like that though, he'll be a whining little girl now, and try to help his new organization make a rivalry with Philadelphia that frankly doesn't exist. You know, because they have thousands of fans who will come to Philadelphia….

Werth is done with me. I won't welcome him back as a part of the 2008 team if he so chooses to come to future reunions, I won't even politely clap. He was lucky to be as good as he was for us, and I thank him for that, but he's not good enough for the money he makes now, and he's not good enough for anyone to bother really caring about his opinion.

Rich Wilkins can be followed on twitter @RTWilkinsIII
Topics
Uncategorized