Ride the Chooch Train: Phillies Should Put Carlos Ruiz in the Lineup on “Days Off” 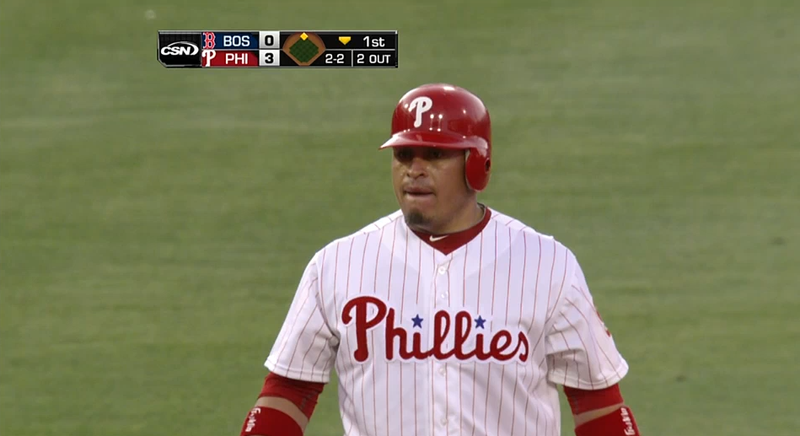 Carlos Ruiz after stealing second base on Friday night.

Carlos Ruiz has been the heart and soul of the Phillies' revival over the last week.  The Phillies have won now six games in a row and seem to be carrying plenty of momentum going forward.  While the Phillies remain in last place, the gap is closing.   The Phillies are four games out of first place and only a half-game behind both the Marlins and the Mets.  The Phillies could even be in third place by the end of tonight.

Todd Zolecki had some great stats on Thursday about hot-hitting Carlos Ruiz making the case for Chooch to make the N.L. All Star team.

And those are just his rankings when he is hitting as a catcher. His .990 OPS overall — it’s a bit lower than his catcher OPS because he is 1-for-3 as a pinch-hitter — ranks 12th in baseball. His .602 slugging percentage is 10th.

I would like to make the case for something else: each week when it's time to rest the catcher, put Carlos Ruiz into the lineup.

How about first base?

Yes, Carlos Ruiz has played third base for the Phillies twice, once to help facilitate a double switch that got Chris Coste to bat and stay in the game, and then once again in the memorable 19-inning game against the Reds.   I am not sure I would want to start Ruiz there and subject him to many plays throughout a game, but first base may work great.

If you arrive early to Phillies games, you're sure to notice that Ruiz regularly takes ground balls, albeit usually on the left side of the infield.   I do not see how he would not be respectable at first base one game a week since it really is necessary to keep a catcher sharp and away from the constant wear and tear that comes from the catching position.

It is not without precedence to use a hot-hitting catcher elsewhere to keeph im in the lineup.  Many hot-hitting catchers over the years played on their "days off", including Joe Torre, Johnny Bench, and more recently, Russell Martin.

Hall of Fame catcher Johnny Bench is considered by many to be the greatest catcher of all time.  During his prime, the "Big Red Machine" run, Bench started many games in left field, right field, third base, and first base.  He would play in almost all 162 while catching 130 or so games.

Joe Torre was the starting catcher for the Braves early in his career.  But it was not uncommon for Torre to play first base and third base.  Eventually, Torre transitioned out of the catching position and played third base.  In 1970, Torre played 90 games at catcher, and ended up playing 73 at third base.

More recently during his dominant prime, Russell Martin could not be kept out of the Dodgers' lineup.   Phillies fans may remember the 2008 Dodgers well, whom the Phillies Broxton'd their way past into the World Series.  Manager Joe Torre, certainly not forgetting his own major league career, played Russell Martin at 11 games at third base, particularly down the stretch when the team was pushing for the National League West title.

In a pinch, Ruiz could probably play third no problem.  But with Ryan Howard out, along with both Laynce Nix and Jim Thome, the opportunity is ripe to keep Carlos Ruiz in the lineup and be his dominant self.