I've got a date with my grandmother today and a slight hangover so here's a quick preview for you guys. 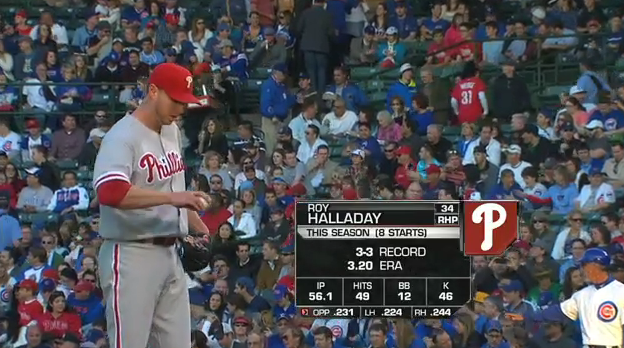 That was Roy Halladay's line the last time he faced the Cardinals, in Game 5 of the NLDS last year. Roy pitched a great game but with an offense who was completely blanked by Chris Carpenter, he took the tough loss as the Phils were eliminated from the playoffs.

This season, Roy Halladay has been sub-par to what he has been in the past. A 4-4 record with  a 3.58 ERA is not the Doc we have seen pitch in Philly and today he's aiming to give the Phillies their first four-game series sweep of the season. In Halladay's last start, he was roughed around by the Nats. Halladay allowed five runs on nine hits over six innings on Tuesday. Halladay took his fourth loss of the season. In his career, Halladay is 2-1 with a 2.10 ERA against the Cardinals.

The Cards will send out Adam Wainwright in an effort to stop the sweep. With a 3-5 record and a 4.78 ERA, Wainwright is having a tough season so far. However, in his last start, he tossed his best game of the season. Wainwright tossed a complete game shutout over the Padres, allowing four hits and striking out 9 for the win. Wainwright said he'd never felt so satisfied after an outing. Wainwright didn't pitch at all last year so he was out of the equation with the Phillies in the NLDS. But in his career, he holds a 2-1 record with a 2.30 ERA against the Phillies.

It's going to be a rubber match today, folks.