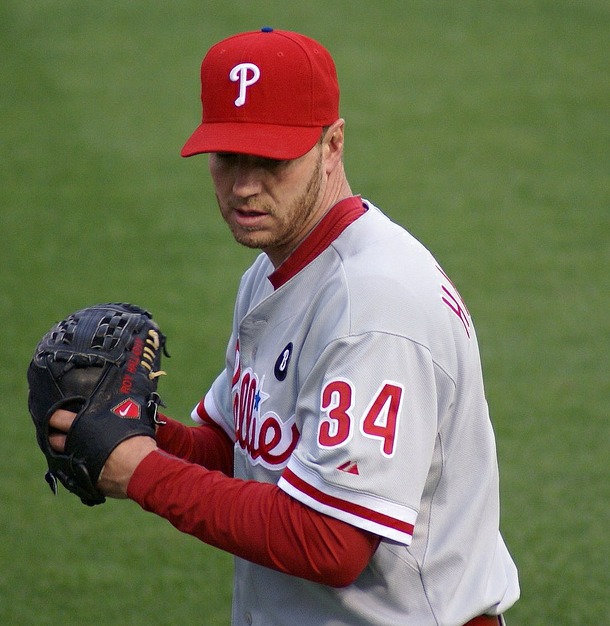 Roy Halladay hasn't won a game since April 16 and has taken three losses in his last five starts. But, don't blame Halladay for all of them. Besides the Atlanta game, Halladay has thrown winnable outings, but his offense has failed to produce enough runs to get him a win. Scoring just 5 runs over five games for Halladay, the offense has surely hurt Halladay. In Halladay's last two starts, he has allowed four earned runs over 14 innings with a 17-to-2 strikeout-to-walk ratio. He is 0-1 in those two games.

Tonight, the Phillies offense looks to back up Roy and give him a well-deserved win. This season, Doc is 3-3 with a 3.20 ERA. In his last outing Halladay tossed seven innings of two-run ball, yielding seven hits and a walk while striking out a season-high 10 against the Padres en route to a tough loss. The Phillies only managed one run against Edison Volquez and took the 2-1 loss.

Halladay pitched against the Cubs on April 27, taking the loss after allowing three earned runs on six hits over seven innings. The Phillies could only mount one run against lefty Paul Maholm in that game, thus giving Halladay his second loss of the season. Halladay is 1-5 with a 3.76 ERA lifetime against the Cubs.

The Cubs will send out Chris Volstad (0-5, 6.92 ERA), who has been struggling all season long. Making his eighth start this season, Volstad is looking for his first win. In his last start, Volstad had cruised easily through five innings against the Brewers, but in the 6th inning everything fell apart. Yielding six runs in the sixth inning, Volstad took the loss. He has pitched against the Phillies this season, allowing four earned runs on eight hits while walking three over six innings. The Phillies surely have Volstad's number over the years, in over 70 innings against them Volstad sports a 2-5 record with a 5.89 ERA.

Last night the Phillies broke out with a six-run ninth inning, including a Hector Luna grand slam. It was Luna's first at-bat as a Phillie and what a way to start his tenure with the big club. The Phillies can surely hit the ball out of the yard. Anybody can at Wrigley. What to watch for tonight is Carlos Ruiz, who has been on a tear this season. Chooch is batting a cool .343 along with 7 home runs (including last night's go-ahead homer in the 8th inning) and 24 RBI.

Placido Polanco will be out of tonight's lineup with a bruised left knee, which he suffered after fouling a pitch off of it last night. Ty Wigginton will fill in for him at third tonight.

Hecotr Luna will start his first game in the big leagues in 636 days when he takes first base tonight.