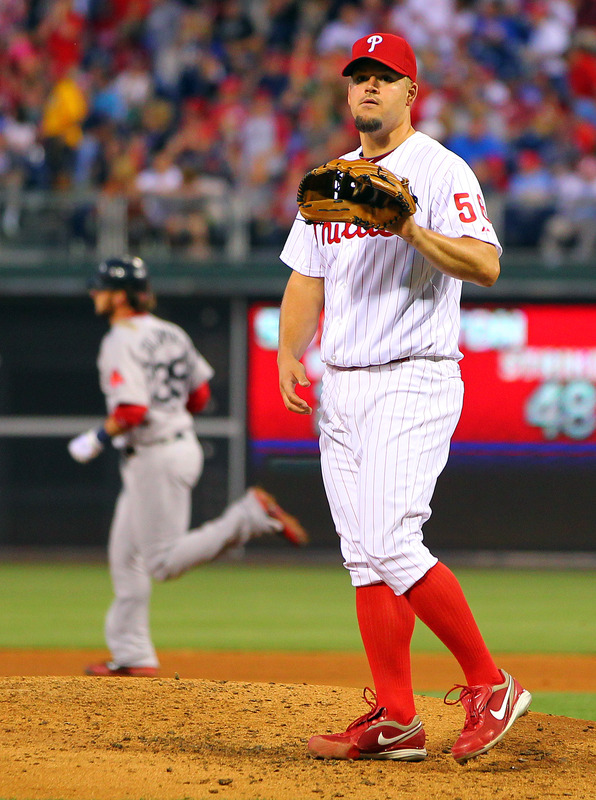 Joe Blanton allowed seven runs (six earned) over 4 1/3 innings in taking the loss in the Phillies' 7-5 loss to the Red Sox. (Photo courtesy of Yahoo.com)

It was a game that featured a little bit of everything. For the Phillies, it defined tough luck.

The Phillies had to do something they hadn't done in quite a while: play from behind. The problem was that once they worked their way out of a hole, they dug a bigger one.

It was not a good night for the starter, as Joe Blanton never found his form. It is a night of positives all the way around for the rest of the Phillies, but the result is not the desired one, as the winning streak is over for the Phillies.

This one started on a bad note immediately, as Joe Blanton served up a solo home run to Mike Aviles to lead off the ballgame. It was the first time in eight games that the Phillies allowed the first run of the game.

Things didn't get much better after that, as Blanton allowed two more runs in the second on a personal error and a double play.

The Phillies did get on the board with an RBI double by Shane Victorino in the third. But Blanton served up back-to-back home runs in the fourth to Will Middlebrooks and Jarrod Saltalamacchia.

The Phillies again chipped into the lead. In the fourth, Hector Luna hit a long single of the wall, scoring a run. Freddy Galvis followed with a two-run home run and all of a sudden it was a one-run game.

But Blanton, who appeared he would be removed in favor of a pinch hitter in the fourth, returned for the fifth and served up a two-run home run to David Ortiz to put the Red Sox back in front by three.

The Phillies didn't have a lack of chances to tie things up in the final innings. In each of the last five innings, the tying run made an appearance in some form. Twice, it was erased on an inning-ending double play. In the seventh, Carlos Ruiz lofted a deep fly ball into the gap in right-center field that was flagged down on an acrobatic diving catch by Ryan Sweeney. In the ninth, a lead-off bunt single by Hunter Pence was erased on a double play, as Ruiz hit a low liner picked out of the air by Aviles at short.

The Phillies did get a run in the eighth on an infield single by Jimmy Rollins and loaded the bases with two outs. But Shane Victorino popped the first pitch up to short to end the inning.

The Phillies brought the tying run right back to the plate after the double play in the ninth, as Wigginton singled up the middle, but Luna struck out to end the game, snapping the Phillies' six-game winning streak by a score of 7-5.

It was already a highly anticipated game because of Pat Burrell's retirement. It almost became memorable for a lot more. The Phillies were down 3-0, 5-1 and 7-4 and almost pulled off the comeback.

But almost only really counts in horseshoes and hand grenades. Instead, the Phillies will be remembered in this one for bringing the tying run into the picture five straight innings. They will be remembered for stranding 11 runners on base.

But in the end, everything but the starting pitching was there. The bullpen pitched 4 2/3 scoreless innings. The offense belted out 15 hits. John Mayberry Jr., Shane Victorino and Hector Luna each had three-hit games. Ty Wigginton and Freddy Galvis had two-hit games. The only starter who ended the game without a hit was Carlos Ruiz and I think it's safe to say he gets a pass for a game.

Joe Blanton was horrendous tonight, and perhaps the biggest mistake was leaving him in for the fifth inning. The Phillies had just trimmed the lead to one. Blanton, before exiting later in the fifth, dug the Phillies a hole they couldn't climb out of.

Sure, it looks bad that the Phillies stranded 11 runners and had the tying run up in five straight innings. But those are actually encouraging signs.

I fully expected Jon Lester to pitch a gem. So, when Blanton was getting lit up in the first two innings, I thought the game might as well have been over then. Not so.

The Phillies didn't hang their heads about a deficit. They chipped away at the lead. The team of April is starting to correct its little errors.

Sometimes the starter isn't going to give you a solid effort. But when you can get it, the Phillies are proving they don't have to be perfect for the team to win. Perhaps this offense will actually suffice. That all remains to be seen. But for now, the goal is to win series and try to take advantage of division losses.

On a day like today, the loss hurts, solely because it would have moved the Phillies our of last place and helped them gain on the entire division. Instead, the loss does nothing. Everything in the NL East remains the same.

The Phillies are back in action tomorrow afternoon as they close their series with the Red Sox. Cliff Lee gets the start against Josh Beckett.