“Take Back the Park” Unsuccessful; Nationals Are as they Defeat Phillies 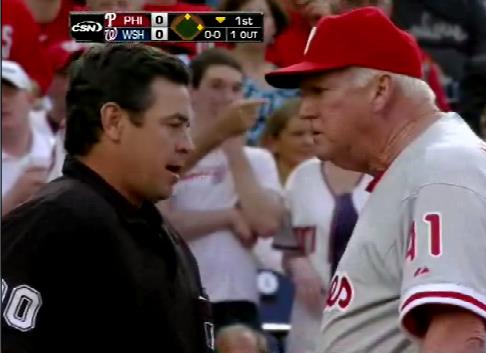 "Take back the park," say the Washington Nationals. "How about I take my foot and take back your ***," says a livid Charlie Manuel (ok, not really). The Phillies' manager was ejected in the bottom of the first inning tonight in Washington for the first time all season after arguing a checked swing from Bryce Harper.

Well, it was a matchup to remember tonight: Ace-in-the-making Stephen Strasburg against Kyle Kendrick. Strasburg has had a phenomenal season thus far, and Kendrick…well, this will likely be his last start in place of Cliff Lee.

The Phillies would put up a couple of runs first in the fourth inning. After Juan Pierre singled to center, Hunter Pence took Strasburg deep, giving the Phils a 2-0 lead. It was the first homer Strasburg allowed all season.

Chad Tracy drilled a solo homer to right field in the bottom of the fourth, putting the Nats on the board.

The second home run Strasburg allowed came in the fifth inning against Carlos Ruiz who hit a lead off homer to dead center field. 3-1 Phils.

Kyle Kendrick would only go five innings tonight. He allowed one run on seven hits, walking two and striking out two. Joe Savery allowed a walk and a double which put two men in scoring position for Jose Contreras. Jesus Flores popped up a sacrifice fly, scoring Espinosa from third. 3-2 Phils.

The Phils really got screwed over in the top of the seventh. The Umpiring staff was short an ump in Joe West for was out with a cold. Shane Victorino stole third base and was clearly safe, however, he was called out. This came back to bite the Phils. Carlos Ruiz hit a double later in the inning which would have scored Shane. Ouch.

Chad Qualls came in for the eighth, and it was not pretty in the least bit. After allowing a single and intentionally walking Rick Ankiel, Jesus Flores doubled to score Chad Tracy. Qualls loaded the bases with another intentional walk, Ian Desmond and Steve Lombardozzi grounded out to end the inning. Tied game.

Henry Rodriguez pitched a scoreless ninth, while Michael Schwimer did the same for the Phillies in bottom half. Yes, Schwimer.  He followed with a scoreless 10th as well.

But, the Phillies were unable to get a hit after the Carlos Ruiz home run, and Schwimer's scoreless inning streak could not continue forever.

After loading the bases while getting two outs, Jesus Flores lined a Schwimer 1-2 pitch up the alley and the Phillies lose 4-3.