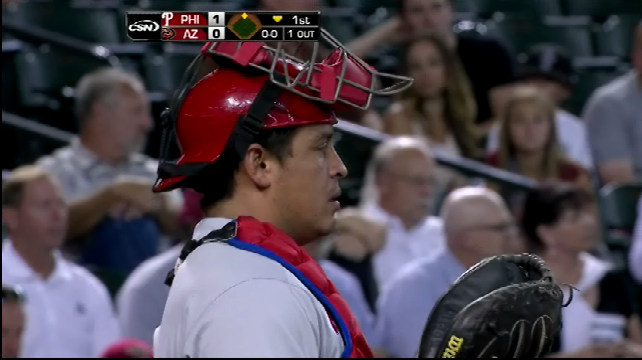 Cole Hamels takes the mound against Edwin Jackson tonight as the last-place Phillies take on the first-place Nationals with a never-before used lineup.

Yeah, Erik puts lineups at the end, but he's too busy flipping burgers and spitting in your McCafe shake to write one today.  Check this out:

I, Jorge Suarez, am damn thankful of two things:

1. Hunter Pence is finally hitting third
2. Carlos Ruiz is hitting behind him, hopefully when it will matter.

The Phillies have a lineup full of #2 hitters, but no one to drive runs in.  Their best chance right now is with Pence third and Ruiz cleanup.  Ruiz hit once in the two-slot in 2008, Todd Zolecki tweets, but has never otherwise hit this high.

By the way, ignore all the Cole Hamels-Bryce Harper crap.  It's done, over, es todo.   Phillies need show up to play baseball and recognize they are a last-place team barely hanging in striking distance.

Hamels should be his usual dominant self and Edwin Jackson will be his usual unpredictable self.   The key for the Phillies is to stop wussing out when they do their "get-runners-on-2nd-and-3rd-with-no-outs" routine, they have a shot to score some runs and win.  They only need 3-4 runs to get this one.