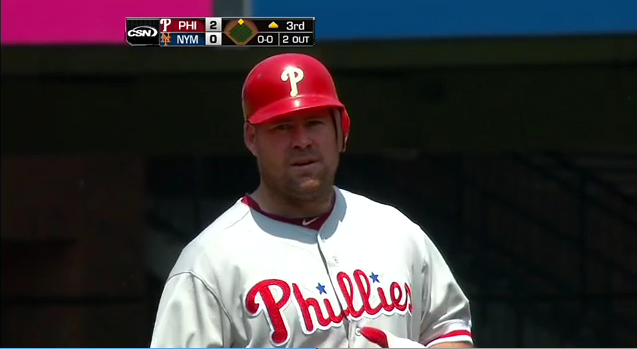 Wearing one of the better-looking Stars and Stripes collection hats in a long time, the Phillies headed up to Shea Stadium in New York and got back into the winning spirit.  Phillies fans must be aware that a Shake Shack is opening in Philadelphia and so therefore had no need to go to Citi Field for today's hot Memorial Day game.

The fun began as the Phillies scored two runs on a Ty Wigginton RBI in the top of the 3rd to take a 2-0 Phillies lead.

The Mets lost shortstop Justin Turner to an ankle injury in the bottom of the 3rd.  Caught in a run down, Turner came down hard on first base.  The injury was eventually diagnosed as a right ankle sprain.  That was a big blow to the Mets who were already without backup shortstop Ronny Cedeño due to a minor injury and Ruben Tejada, the team's starting shortstop who is occupying a DL spot.

David Wright ended up playing shortstop, where he has spent just two innings of his major league career.

Cole Hamels walked Lucas Duda to begin the 5th and it immediately came back to haunt Hamels.  The next batter Vinny Rotino lined a home run off the wall in left field – which really should have been in play but the Mets wanted their players to hit more home runs – to tie it up in the 5th.

So short on players, Jon Niese batted for himself and while the broadcasters thought he might be removed for a reliever, Niese came out to start the 6th and promptly walked Ty Wigginton.  John Mayberry Jr. made them regret keeping him in by slamming a home run to left field, and it was not a cheap one like Rotino's and chased Jon Niese.

Hamels overcame a runner at third with one out in the 8th, showing how his effectiveness that remained despite giving up four runs.

But, Ty Wigginton was not done.  In the top of the 9th, he homered to left, a three-run shot which gave the Phillies a four-run lead.   Wigginton had six RBI in all today.