After Phillies Drop Game One, Cliff Lee Gets Nod In Game Two Against Rays 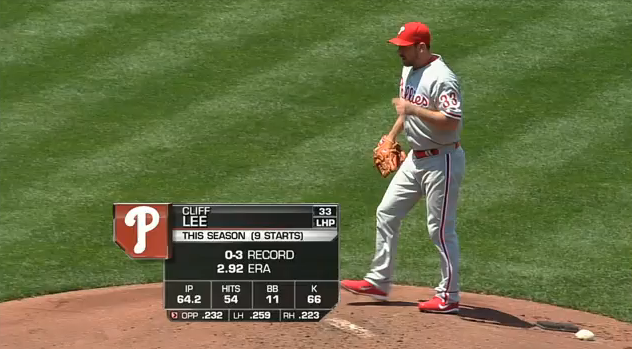 Cole Hamels tossed seven innings of shutout baseball, allowing three hits while walking three and striking out seven against the Rays. Hamels earned the no-decision in the Phillies' 3-2 loss in game one. Antonio Bastardo is the one to blame for the loss, he walked the first two batters he faced and surrendered a three-run homer to Carlos Pena. The Phils were unable to get back ahead of the Rays. With the Phillies dropping game one, it gives the Rays their 39th win of the year and the Phillies their 39th loss of the year.

It's June 24 and Cliff Lee is still winless. He has the numbers of a tough-luck reliever, but in reality he's a tough luck starter. Sometimes it's not his fault, but others it is. He's had to wait two extra days for another chance to notch his first W. Will he be able to do it tonight against the Rays?

Tonight Cliff Lee (0-3, 3.48 ERA) will make his twelfth start of the season all while seeking for his first win of the season. Lee has come up short this season a lot of times. Sometimes it's been the lack of run support, but as of late Lee has had a considerable amount of run support and he has blown all of the leads that he's been given. In his last start, against Toronto on Saturday, Lee was given a 4-2 lead late into the game. In the top of the 8th, Lee surrendered three runs (two on account of a Jimmy Rollins throwing error) and another on a double. All in all, Cliff Lee left the game after seven innings. Lee allowed 12 hits, five earned runs while walking one and striking out three Blue Jays to receive the no-decision. In his career, Lee is 6-5 with a 2.87 ERA against the Rays.

On the mound for the Rays will be Cesar Ramos (1-0, 2.08 ERA), who is getting the spot start tonight. Usually an arm out of the bullpen, Ramos is getting his first start of the season. In 9 games (17 1/3 innings) this season, Ramos has allowed four earned runs on twelve hits and has struck out 15 batters. Ramos has never faced the Phillies before in his career