Back on road, Phillies look to find way in Baltimore 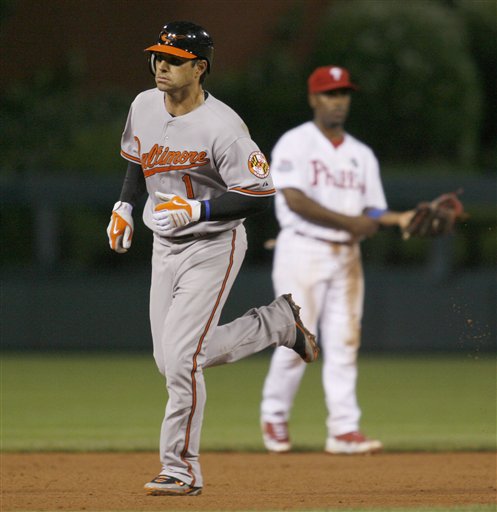 Brian Roberts helped the Orioles sweep the Phillies the last time the two teams met in 2009. (Courtesy of SI.com)

After being swept by the MLB-Dodgers to push their season-high losing streak to six games, the Phillies get the team at the top of the most competitive division in the American League.

The Baltimore Orioles are one of baseball's surprise teams, tied for the AL East lead with the Tampa Bay Rays. Their record is 32-25. The Phillies' record is 28-31. At this point in the season, you'd probably think the roles would be reversed.

But the Orioles are a good young team. After making a manager change mid-season last year, they turned things around enough to finish the season as a spoiler, winning their final regular season game against the Red Sox and knocking them out of the Postseason. That's significant for the new Phillies closer Jonathan Papelbon. The last time he pitched in Camden Yards, he lost that game for Boston.

The Orioles are not a lineup with superstars. Rather, this is a balanced lineup with several different contributors. Six of their nine regular starters have 23 or more RBIs. Four players have nine or more home runs.

If there is an All-Star candidate on the O's, it's centerfielder Adam Jones. He leads the Orioles with a .304 average, 16 home runs and 35 RBIs. Chris Davis, Matt Wieters, Nick Markakis, J.J. Hardy and Wilson Betemit have also been solid this season. Hardy is the only other Oriole with double-digit home runs with 10. Markakis is second on the team with 26 RBIs. Hardy and Wieters each have 25. Davis and Betemit each have 23.

But, here's where the Phillies catch a bit of a break. Jones has been day-to-day with a wrist injury. He'll likely play, but may not be 100 percent. Markakis is on the DL, so he'll miss the series. Nolan Reimold, who has been one of Baltimore's stars in recent years, is also out.

Arrieta only last 4 2/3 innings in his last start allowing four runs to the Rays in a loss. Much like Blanton, Arrieta has lost five of his last six starts, having not won since May 2. During that stretch, he has allowed at least four runs in all but one start, including at least six runs in three of those starts.  This is his first start against the Phillies.

In the middle game, Vance Worley (3-2, 3.38 ERA) gets the start for the Phillies. The Orioles have yet to announce a starter. – Worley made his first start since going on the DL after his May 11 start on Monday, allowing three runs in four innings in a no-decision. Worley will be making his first start against the Orioles.

Hammel allowed two runs over five innings in a no-decision against the Red Sox in his last start. He has been the best pitchers for the Orioles this season, winning six games and not allowing more than five runs in any start this season, including eight starts of allowing two runs or less. In his career against the Phillies (four games, three starts), Hammel is 1-2 with a 6.75 ERA.

It's simply hard to have any confidence in the Phillies at all right now from any aspect. It's certainly time to stop talking about the pitching favoring the Phillies when they have no clear advantages right now.

Despite the Orioles having to deal with injuries of their own, they have enough good pieces in the lineup to manage more than a few runs this series. The Phillies, aside from Lee and perhaps Worley, depending how good he is health-wise and such, the Phillies have the potential to give up quite a few runs as well.