Cole Hamels and David Price squared off this afternoon in the first game of a double-header. Friday's game was washed out, pushing a game back to 6:35 tonight, and starting this game 30 minutes early.

It was a scoreless battle between the Phils and Rays until the sixth inning when Jimmy Rollins jacked a solo homer to left field, putting the Phils on the board.

Cole Hamels would pitch an excellent seven innings this afternoon. He allowed just three hits and walked three while striking out seven. He tossed 111 pitches, 71 for strikes.

This is where it gets ugly. Antonio Bastardo has been superb this season, and has really been a solid set-up or seventh inning man. This has been his only exception.

After walking Elliot Johnson and B.J. Upton, Carlos Pena went deep to right field to score three, putting the Rays up 3-1. Chad Qualls would pitch 2/3 of a scoreless inning afterwards.

David Price was taken out after seven innings and was replaced by Burke Badenhop. In the bottom of the eighth, Hunter Pence doubled followed by a single from Carlos Ruiz. Ty Wigginton sent one up the middle for an RBI single, bringing the Phils to two runs.

However, that is where our story ends. Michael Schwimer pitched a perfect ninth, and Fernando Rodney saved it for the Rays. 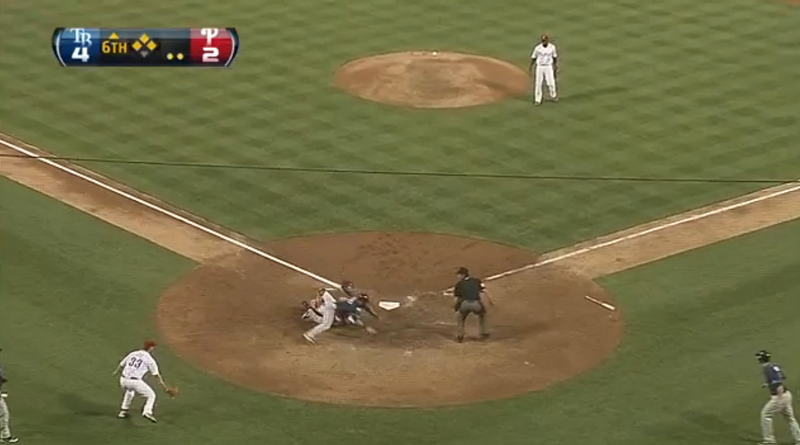 Onto game two. Cliff Lee was still looking for that first win, can you believe it's almost July and he's winless?

It wouldn't be an easy start for Cliff. In the second, Sean Rodriguez doubled to deep center to score Jeff Keppinger. Brooks Conrad later doubled to left to score Rodriguez and Ben Zobrist. 3-0 Rays.

Hunter Pence scored in the fourth inning on a double from Placido Polanco. Polanco was able to score on a single from John Mayberry, Jr. 3-2 Rays.

In the top of the sixth, Brooks Conrad struck again with a double to right-center which scoried Zobrist and Rodriguez. On the throw home, Brian Schneider was drilled at the plate by Rodriguez. Schneider took a few moments before settling back in, but later limped off the field after not being able to handle the pain in his right ankle. Carlos Ruiz would come into the game with the Rays leading 5-2.

Polanco came through once again with an RBI double in the sixth, scoring Pence. Pence was shown giving Jose Lobaton a shove at home plate when he came around. Lobaton stumbled, and looked at Pence funny. May or may not have been intentional.

It was announced during the game that Brian Schneider left the game with a right ankle sprain. Tough break for Schneid. Should he go to the DL, it's likely that Erik Kratz will be called up in the mean time.

Cliff Lee's night was complete after seven innings. He allowed five earned runs on six hits, walking three and striking out nine. Excellent outing which unfortunately did not result in a win.

B.J. Rosenberg, the team's 26th man for this double-header came in for the eighth inning. He walked four, which obviously allowed one run to score. That would be all for the 26th man.

Jake Diekman came in with two outs and the bases loaded…and he walked the first batter he faced. 7-3 Rays. He made it out of the inning with a strikeout to Desmond Jennings. Diekman would also pitch a scoreless ninth, striking out two.

And that's pretty much your ballgame. The Phillies couldn't come back from a four-run deficit, and they drop both games of today's double-header, losing the series to the Rays.

The Phillies and Pirates will start a four-game series at home starting tomorrow before the Phils pack up and ship down to Miami on Friday.