Clayton Kershaw and Company Send Phillies Back to .500; Phils Drop, 4-3 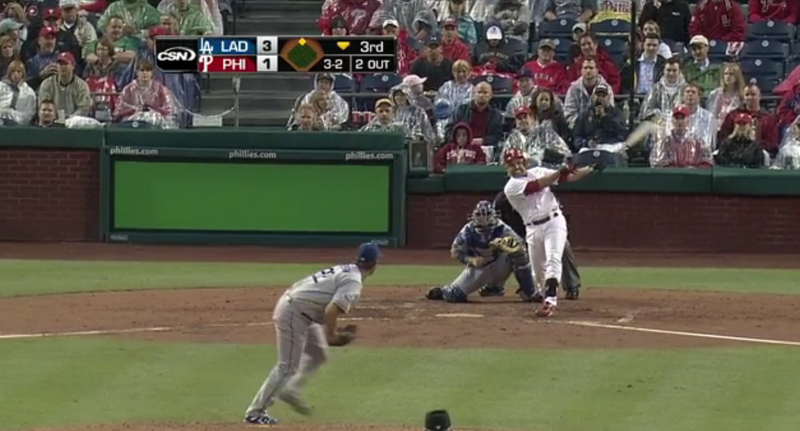 The Phillies welcomed Los Angeles to Citizens Bank Park with a soggy game one of a four-game series this evening. Vance Worley was limited to 75 pitches in his first start back from the DL with a sore elbow. He will pitch the remainder of the season with a bone chip, but that didn't stop him from pitching a strong four innings, considering his condition.

The Dodgers would take an early lead in a 32-pitch inning from Vance. Elian Herrera would score on a single from Juan Rivera, followed by a single from former Phillie Bobby Abreu which scored Andre Ethier.

Adam Kennedy was able to score on an infield single from the super speedy Dee Gordon, putting the Dodgers up 3-0.

From the get-go, this looked like an inevitable loss. The best team in baseball with one of the best starters in the league taking the hill for LA; Clayton Kershaw.

However, the Phillies showed a little bit of life in the third inning. After a double to deep left from John Mayberry, Freddy Galvis sent him home with an RBI single. With Freddy on the basepaths, Placido Polanco would touch 'em all with a two-run blast to left field. Tied ballgame.

Worley was taken out after tossing 80 pitches in four innings. He allowed three earned runs on five hits, walking three and striking out four.

Joe Savery would come in for a very impressive 2.1 innings in which he allowed just one hit while striking out three (all in the same inning) and hitting Dee Gordon. Antonio Bastardo replaced Savery, retiring the side.

Jonathan Papelbon came in for the ninth in a 3-3 game. Dee Gordon absolutely flew around the bases for a lead off triple, and he would score on a single from Herrera.

Game two of this series will be tomorrow night at 7:05. Cliff Lee will take the hill for the Phils, one day after his bobblehead giveaway night.