Eagles Flyers Phillies Sixers About Us Write For Us
Phillies are Reportedly Shopping Jim Thome; Trade Him ONLY if He Wants
Baseball Talk Philadelphia: Friday Fan Rant 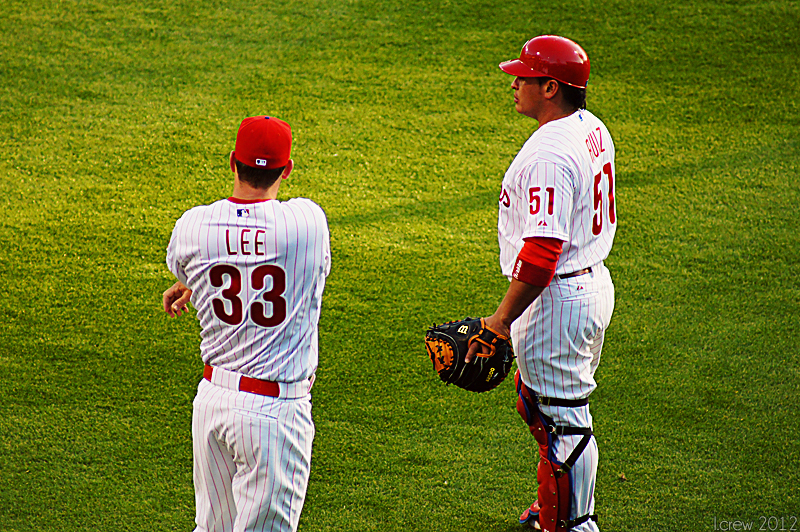 The Phillies were unable to end their homestand on a good note as they failed to seal a series victory against the Pirates. They took the first two games by storm, but were outhit by the Pirates in the last two games on Wednesday and yesterday. The Phils are embarking on a six-game road trip and tonight they'll make their first stop in Miami, Florida. The Phillies are meeting the Marlins for the third time this season, but it's their first time visiting the brand-new Marlins Park. Honestly, I think this park is ugly. Even uglier than Citi Field.

Cliff Lee (0-4, 3.72 ERA), still winless, will seek his first victory of the 2012 season. It's June 29 and Lee remains winless after 12 starts. It's tough and sad, but he's not so innocent. In Lee's last start, on Sunday against Tampa, he was tagged for five earned runs on six hits over seven innings. Lee struck out 9 and walked three in the loss, his fourth of the year. Lee has a 5.10 ERA in his last seven starts. He has blown four leads during that span: two three-run leads, one two-run lead and a one-run lead. He has also allowed 14 earned runs in his past three starts (20 innings). Lee has not pitched against the Marlins this year and has a 2-0 record with a 2.31 ERA during his career.

The Marlins will send out Josh Johnson (4-5, 3.96 ERA), who is making his sixteenth start of the season. Johnson is coming off of a very strong tart against Toronto where he allowed just one earned run on two hits while striking out seven through seven innings. Despite his great effort, the Marlins only scored one run to support him. The Blue Jays ended up scoring six runs in the 9th inning, so Johnson was handed the no-decision. During May, the Marlins were 6-0 in games Johnson started (he won only three of those games with three no-decisions), but in June so far the Marlins are 1-3 in his starts (he is 1-2 with a no-decision). Johnson pitched against the Phillies back on April 11 where he was lit up for six earned runs on 11 hits over 3 2/3 innings to get the loss. In his career, Johnson is 5-4 with a 3.68 ERA against the Phils.

Will this finally be the game that Cliff Lee gets a win? The Phillies' bats have been cranking out a lot of runs, 51 over their past 10 games to be exact. Like stated before, Cliff Lee has blown four leads in as many starts. At this point it's not the offense's fault, it's Cliff Lee's. Hopefully Chase Utley can provide some power and keep a spur in this team's behind to keep them going.

Worth Noting: The Phillies and Marlins are split 3-3 in their season matchup. The Marlins have taken a series and the Phillies have taken one as well.