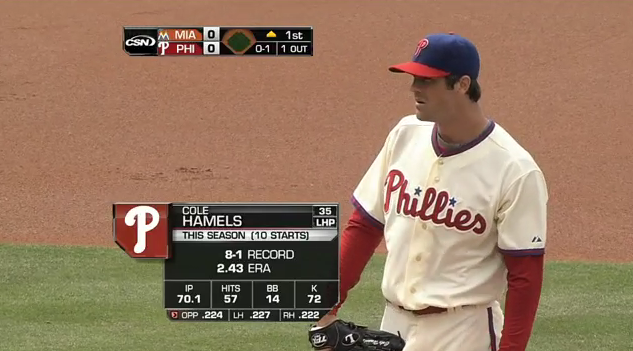 If there is anything I'm afraid of with this team, it's losing Cole Hamels (8-2, 2.81 ERA). Hamels hasbeen my favorite Phillie since he came up from the minors. The thought of him pitching in another uniform makes me cringe and today he'll be taking on the Los Angeles Dodgers. A team who is rumored to be a huge competitor for his services if Hamels and the Phillies can't agree on a deal before the offseason. Hamels is from south California and he has always dominated the NL West teams. If I were Magic Johnson, which I'm not, I would surely go for Hamels. I, Erik Seybold, just hope that Hamels stays put in Philly.

Hamels arguably made his worst start of the season on Saturday against Miami. Hamels allowed five earned runs on seven hits across 6 2/3 innings. Hamels struck out eight Marlins but his two home runs given up to Hanley Ramirez sealed the deal. Besides his past two starts (9 ER in 14 2/3 innings), Hamels has been outstanding this season. Hamels also has remarkable success against the Dodgers in his career. In 38 innings, Hamels has a 3-0 record and a 1.18 ERA against them.

Opposing the Phillies will be righty Aaron Harang (4-3, 3.90 ERA) who is making his twelfth start of the season. Harang is coming off of a solid outing against the Rockies. Harang allowed just one run on four hits across six innings to earn the win. Harang struck out six in that outing to bring his total to 56 on the season. In his career, Harang has not faired 100% successful against the Phillies. In over 66 innings pitched against them, Harang holds a 3-2 record with a 5.29 ERA.

Michael Martinez has been recalled from Triple-A Lehigh Valley and he will take Galvis' spot on the roster.

Hopefully Hamels can have continued success because seeing the Phillies los five straight frankly pisses me off. It's old and annoying seeing this team with so many problems at the same and different times. Roy Halladay is shut down for three weeks and now that Freddy Galvis is on the DL there will be a gap defensively in the infield. Things aren't looking bright for the Phillies, who are now two games below .500 (28-30).

Where do we turn to?