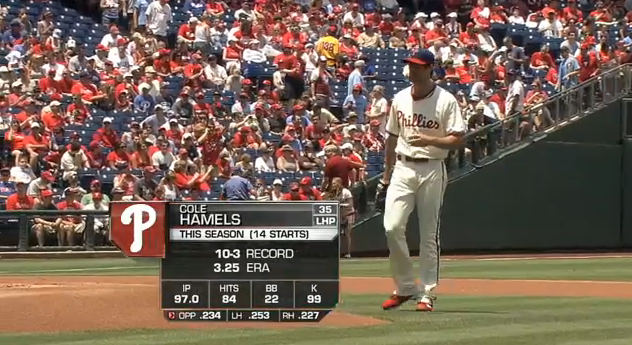 Well last night wasn't the start we were looking for. Cliff Lee was lit up for six earned and the Phils only produced two runs themselves. It wasn't a good game at all, and for Cliff Lee it hasn't been a good season at all. The Marlins now hold a 4-3 record against the Phillies this year, as well as sitting 2 1/2 games ahead of them in the divison standings. This afternoon, Cole Hamels (10-3, 3.03 ERA) will look to notch his first win against the Marlins this season while his counterpart, Mark Buehrle (6-8, 3.55 ERA) will look to do the same against the Phillies.

Hamels is coming off of a strong outing against Tampa Bay. On Sunday, Hamels started game one of a day-night double header, tossing seven scoreless against the Rays. Hamels only surrendered three hits and struck out seven, but with just one run to work with it didn't seem safe. Antonio Bastardo walked the first two batters he saw in the 8th and surrendered a three-run jack to Carlos Pena, Phillies lose. Hamels gets a no-decision. Hamels is 0-2 when facing the Marlins this year, both times at home. Most recently on June 2, Hamels was tagged for five earned on seven hits, two of them home runs, in a 5-4 loss. In his career, Hamels is 6-9 with a 3.67 ERA against the Marlins.

The Marlins will send out lefty veteran Mark Buehrle in an effort to take this series early. Buehrle is coming off of his own shutout outing as well. On Sunday, Buerhle tossed seven scoreless against the Blue Jays, allowing seven hits while striking out seven as well. Buerhle got the win to make him the most-winningest pitcher in Interleague Play history. Buehrle is seeking his first win against the Phillies this season. Being 0-2 against the Phillies as well, his most recent loss came on June 1 when he allowed four earned runs on eleven hits over five innings. In his career against Philadelphia, he is 3-2 with a 5.23 ERA.

The Phillies are back in dead last in the NL East with a 36-43 record. The last time this team was seven games under .500 for the first time since April of 2007. What the hell is the matter with this team? Like seriously it's like they are bi-polar on the field. They give us hope for just one, maybe two or three games, but then slide back into a pile of crap. If they can't find a way to make anything work, Cole Hamels is going to be a Dodger at the end of the season.