Cole Hamels Takes On Rays, David Price In Game One Of Doubleheader 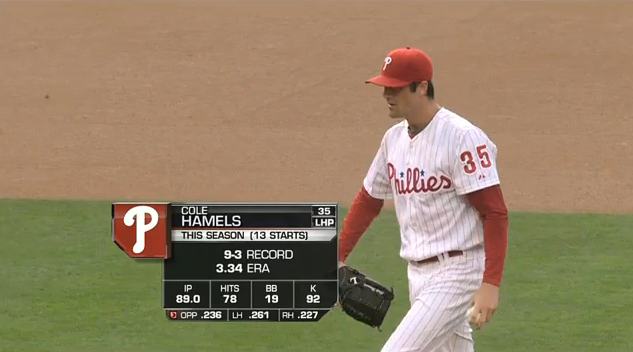 What a way to end yesterday's ball game. If there's anybody who can pull off such a clutch moment it's Jim Thome. The Phillies took game one of this three-game set yesterday, 7-6. Even though they've taken game one, they still have work to do. Today is a day-night doubleheader. Game one will start at 1:05 PM and Game two will start at 6:35 PM.

In game one of this day-night doubleheader, Cole Hamels (10-3, 3.25 ERA) will seek his 11th win of the season as well as a series win over the Tampa Bay Rays. Hamels has Tampa's number in his career. Although he is 0-1 in regular season games, Hamels still made his mark known as an upcoming dominating pitcher during the 2008 World Series. During the series Hamels made two starts, winning Game 1 and handed a no-decision in Game 5, along with posting a 2.77 ERA against the Rays. Since then, Hamels has grown into one of the toughest lefties in the game. He'll take on another premiere left-hander in David Price today.

In his previous four starts before Tuesday, Hamels recorded a 26-to-6 strikeout-to-walk ratio. He also surrendered six home runs and posted a 6.08 ERA. He allowed at least four runs in each of those starts. In Hamels' last start, on Tuesday against the Rockies, he broke out of that bad stretch. Hamels threw eight solid innings against the Rockies, allowing just two earned runs on six hits while walking three and striking out seven. Hamels earned his 10th win of the season on Tuesday, becoming just the third starting pitcher to reach double digits in Wins this season. The Mets' R.A. Dickey leads all of baseball with 11 and Cardinals' Lance Lynn is tied with Hamels (10). In one career regular season start, Hamels is 0-1 with a 12.27 ERA (3 2/3 innings) against the Rays.

Opposing Hamels and the Phils will be Rays' ace lefty David Price (9-4, 3.08 ERA). Price is coming off his eighth quality start of the season, against the Nationals on Tuesday. Price held the Nationals to just three earned runs on seven hits over seven innings. Price walked one and struck out four to earn his ninth win of the season. Price was just a rookie in 2008 when his team made it to the World Series. Called up from the minors in September of that year, Price made one start and four relief appearances. Making the playoff roster, Price went 1-0 with a spotless ERA against the Red Sox in the ALCS. Price appeared in relief in Games 2 and 5 of the World Series against the Phillies, posting a 2.70 ERA. In one career regular season start, Price is 0-1 with a 10.38 ERA (4 1/3 innings) against the Phillies.

The Phillies are looking to build their momentum and turn around what has been a really rough season. At four games under .500, the Phillies are slowly crawling in the right direction. Jimmy Rollins is playing really well, the pitching is acceptable and the bits and pieces are adding up together. Along with rumors of Chase Utley returning as soon as next week, things may finally be looking bright for this Phillies team. No longer in last place, the Phillies still sit 8 1/2 games behind the Nationals in the division.

The Phillies have called up BJ Rosenberg for today's doubleheader. In cooperation with the CBA (Collective Bargaining Agreement), teams are allowed a 26th man on the roster on days where there are split-admission, day-night doubleheaders. This is Rosenberg's second stint with the Phils. Rosenberg allowed 2 runs each in both appearances he had, putting his ERA at 21.60 in 1 2/3 IP. Despite monster numbers in the bigs, Rosenberg has a 1.52 ERA and 11.42 K/9 IP for Triple-A Lehigh Valley.