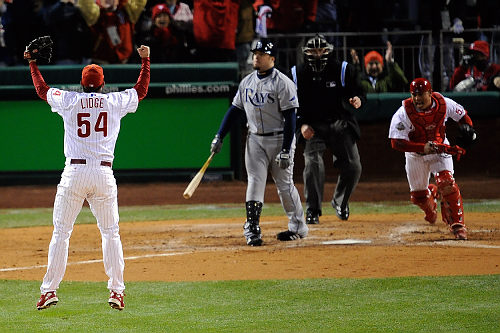 The last time the Tampa Bay Rays were in Philadelphia, this was how the final out looked. (Photo courtesy of ProSportsBlogging.com)

We all remember it vividly. The moment when the Phillies were crowned champions. The opponent is never forgotten. That team was the Tampa Bay Rays.

The two have rarely crossed paths since then. Aside from an interleague series in Tampa in 2009, the two have not met. This is the first time the Rays will be in Citizens Bank Park for a game that counts since 2008 – the two teams played in the on-deck series at Citizens Bank Park in 2009.

The Rays are still made up of the same core. But, that core is shorthanded at the moment. Evan Longoria has been on the DL with a hamstring injury. He was expected to be ready close to this weekend, when he left a minor-league rehab game early with discomfort. He will be out for the entire series.

Other names on the DL include Luke Scott, starters Jeff Niemann and Jeremy Hellickson and outfielder Sam Fuld.

But in the lineup will be powerful hitters like Carlos Pena, Ben Zobrist, B.J. Upton and Matt Joyce. Joyce leads the team with 11 home runs and has 34 RBIs, one behind Scott for the team lead. Pena has nine home runs and 29 RBIs.

The Rays are a tough offense because of their balance. With high temperatures in Philadelphia, power could go a long way in winning games. Six regulars to the lineup – including DH Scott – have at least five home runs this season. Nine players on the roster have at least 18 RBIs.

Also, for a Phillies team that isn't too good at finding the comeback trail, leads will be important. The Rays have a strong bullpen, headed by closer Fernando Rodney and his league-leading 20 saves.

Shields took a no-decision in his last start, allowing three unearned runs to the Marlins in 7 2/3 innings. 12 of the 50 runs Shields has allowed this season have been unearned. Shields is in a losing funk of his own, winning just once since May 13. In his career against the Phillies (one start), Shields picked up the win allowing four runs in seven innings.

Cobb pitched seven shutout innings to get the win in his last start. Since starting his season 2-0, Cobb has lost three of four starts, allowing at least four runs in each. This is his first career appearance against the Phillies.

In the finale, Cole Hamels (10-3, 3.25 ERA) gets the start against David Price (9-4, 3.08 ERA) – Hamels picked up the win in an excellent start where he allowed two runs over eight innings to the Rockies. Since falling to 8-3, Hamels has won his last two starts. In his career against the Rays (one start), Hamels allowed six runs (five earned) in just 3 2/3 innings.

Price won his last start, allowing four runs (three earned) over seven innings to Washington. He has allowed more than three runs in only three starts this season. Despite being 3-1 in June, two of his starts have only lasted five innings. In his career against the Phillies (one start), Price allowed 10 runs (five earned) in 4 1/3 innings.

The Phillies offense is starting to look up – hold for last night's miserable game – and a team that is built around its lineup, which isn't fully intact, should help the Phillies.

Sooner or later, Cliff Lee does have to win. I think that an American League team does give Lee a better shot at a win solely for familiarity, but that really holds no major bearing. Either way, one of these times, Lee is really going to stun hitter after hitter and be brilliant. Remember that his last opportunity at a win wasn't all on Lee, as a two-run error by Jimmy Rollins proved to be the difference. Maybe things change this time.

The middle game is really a toss-up on the mound. But in a battle of offenses, I'll take the Rays over the Phillies for two reasons. First, Kendrick does not have a good track record of late. Second, the Phillies don't have a good track record at all against pitchers they haven't seen. I have them scoring three runs in the game against Cobb. If they can score five or six, they will be in good shape. But they need the kind of offense that won the first two games of the Rockies series.

The finale is a marquee pitching matchup between two aces. Cole Hamels has been the Phillies ace this season. An ace does not always constitute a pitcher who performs well more times than not. An ace is a pitcher who wins most of his starts because of his skill but also what he brings to the field. For whatever reason, Hamels is bringing the best out in the Phillies when he's on the mound.

That bodes well for the Phillies against Rays ace David Price. Price is a talented pitcher, a name that you have to throw into the Cy Young discussion every year during spring training because big things are expected.

This is no easy win. But if the Phillies get their usual pitching from Hamels and the offense can give him a lead, they might just be able to take this game. With the way that the offense has been lately, I'll give the nod to the Phillies.