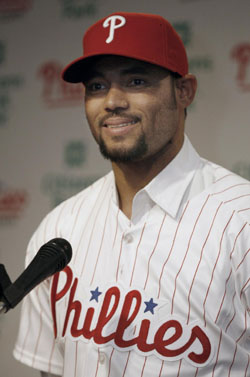 Pedro Feliz, the 37-year old third baseman who helped the Phillies win their World Series in 2008, is back in the Delaware Valley for a second time and he'll be across the river.

For the second time in his career, Feliz will be playing third base for the Camden Riversharks of the Atlantic League of Professional Baseball, an independent professional baseball league. Feliz is returning to the team after failing to make the major league roster with the San Diego Padres.

Feliz played for the Phillies in 2008 and 2009 and was a key member of their World Series and NL Champion teams. Feliz was released after the 2009 season and was replaced with Placido Polanco. Both have stellar gloves, but boy did Pedro Feliz have a cannon.

Although Feliz could never play in the majors again, staying in the same area that he won a World Series in could help bring in support and fans for the Riversharks.