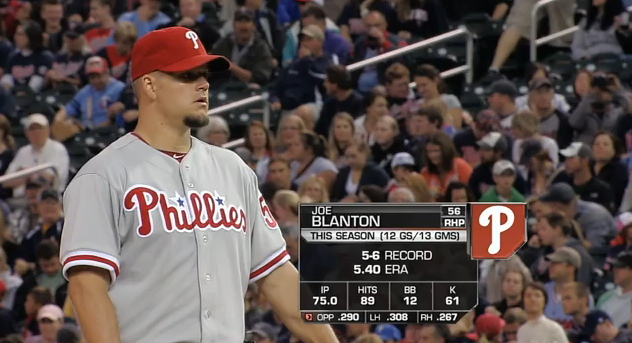 Seriously. If the Phillies played like they did last night for the first 68 games of the season, it would be a totally different atomosphere in this city. Cole Hamels was excellent, Jimmy Rollins played his butt off, John Mayberry is making great swings, and Carlos Ruiz is still Carlos Ruiz-ing the ball. It may just be because the Rockies suck, but nonetheless it's still good to see the Phillies win. Hopefully they can bust out of their three-month long funk with this homestand.

Tonight, Joe Blanton (6-6, 4.93 ERA) will be on the hill to make his  fourteenth start of the season tonight. Blanton is coming off of a stellar one-run complete game win against Minnesota. On Thursday, Blanton allowed just seven hits and struck out seven Twins to earn his sixth win of the season. Blanton had been on a terrible stretch before Thursday, going 1-3 with a 9.91 ERA (29 earned runs) in his previous five games and had allowed 11 home runs. Blanton will look to build off of his success from Thursday tonight as he takes on the Rockies. In two career starts, Blanton has a 1-0 record with a 5.23 ERA against the Rockies.

On the mound for the Rockies will be Alex White (2-5, 5.56 ERA), who will make his ninth start of the season. In White's last start, he was unable to get out of the fourth inning after developing a blister on his finger. He allowed two earned runs on seven hits against the Athletics. White struck out five, but walked four in the loss. In his career, White has never faced the Phillies.

The Rockies are on a four-man rotation now after manager Jim Tracy sent Jeremy Guthrie (3-6, 7.02 ERA) to the bullpen. The starting rotation is on a strict 75 pitch limit, which will put a lot of strain on the bullpen. Last night Josh Outman only made it through 4 1/3 innings before being pulled. He had thrown 72 pitches. With White having a high walk rate (16 BB in 45 1/3 innings), the Phillies could possibly get him out of the game before the fifth inning.