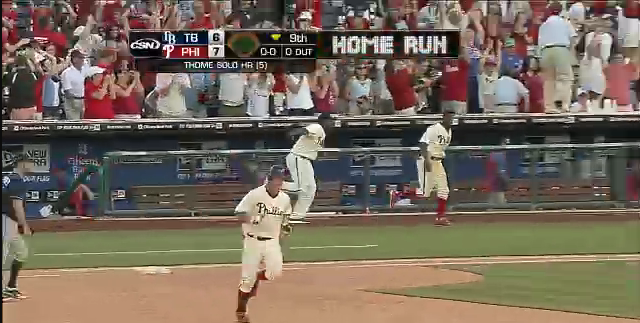 According to CSNPhilly's Jim Salisbury, Jonathan Papelbon wanted to make up for his blown save that he put some money onto the table.

Before Jim Thome batted to lead off the bottom of the ninth inning of Saturday's game against the Rays, Papelbon offered Thome $5,000 if he hit a walk-off home run.  Once Thome did it, Papelbon was ready to write a check.

Ryan Lawrence reports that the traditionally shaving cream pie was actually whipped cream.  Lawrence also reports that Jake McGee is the 400th pitcher to give up a home run to  Thome.

Chuck Hixson on Twitter suggests that Papelbon make a donation to a charity of Thome's choice for his home run payment. Other storylines/tidbits to recap today's game:

Juan Pierre hit his first ever 3-run home run.  He said to Kevin Cooney of the Bucks County Courier Times, "That’s got to be the first time that a guy with 600 homers and 17 homers hit them in the same day."

Rays starter James Shields went five innings and allowed five runs, a day after he was scheduled to start.  The Phillies opted to save Cliff Lee for Sunday, given his warm up routine being completed on Friday.

Jeff Keppinger went 3 for 5 and drove in three runs for the Phillies.   Shields drove in a run in a rare batting appearance, and both Brooks Conrad and Sean Rodriguez had key late-inning RBI for the Rays.

Jonathan Papelbon earned the win after blowing his first save opportunity of the year.