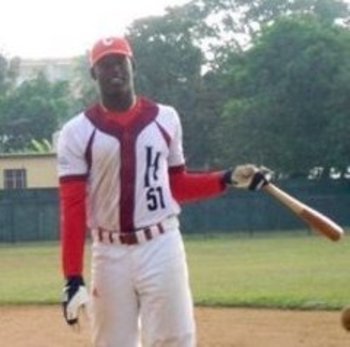 Source: Cuban outfielder Jorge Soler, 20, is now a free agent, eligible to sign with any club.  Let the bidding on Soler begin. He had been waiting to be cleared by the U.S. Treasury Department's Office of Foreign Assets Control.

Jeff Passan of Yahoo Sports is reported this offseason that the Phillies and Yankees are "finalists" for the services of Cuban defector Jorge Soler.

The Chicago Tribune report that the Cubs were close to signing Soler is reportedly inaccurate.

The report does help provide insight into what Soler can do for a club:  Soler is 6 foot 3 inches tall and considered to have "five tool potential".   Soler is 19 years old and his tools are considered "raw"

What would it cost to sign him?  "$27.5 million for three or four years", the offseason report said the Cubs were going to spend, maybe one indicator of his price.  Unless a clause is included to delcare him a free agent upon completion, he would be under team control for six.

Soler would be a nice fit in center field for the Phillies.