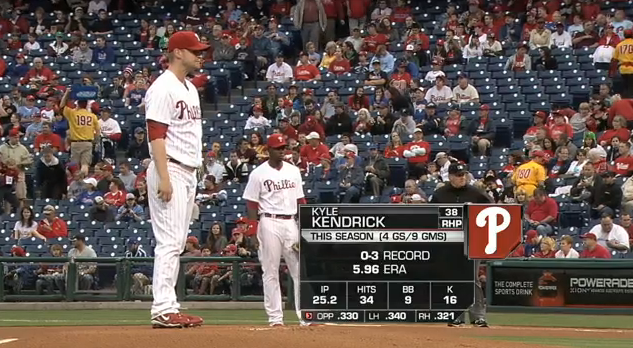 After dropping the first two games of this series in Toronto, the Phillies will turn to Kyle Kendrick in an effort to prevent the sweep. Yesterday was just another example of bad luck and bad baseball. Cliff Lee had everything going for him. A nice lead, a good pitch count, and a chance to finally get his first victory of the year. But fate had it different for Cliff, who allowed five earned over seven innings yesterday. With Lee blowing the lead, he still remains winless and has an 0-3 record with a 3.48 ERA.

Today Kyle Kendrick (2-6, 5.08 ERA) will make the start, his tenth of the season. Kendrick is coming off of his second straight start of allowing five earned runs or more. On Tuesday, against the Twins, Kendrick yielded six earned runs on eight hits while walking two and striking out two over four innings. In Kendrick's last three starts, he has a 1-2 record with a 7.80 ERA. In his career (8 innings), Kendrick is 0-0 with a 6.75 ERA.

Brett Cecil, who is making his season debut, will be on the mound for the Jays today in an effort to sweep. Cecil has spent all season with the Jays' Double-A affiliate New Hampshire posting a 3-2 record with a 3.32 ERA in nine starts. Cecil was promoted to Triple-A Las Vegas where he was then promoted to the big leagues to fill in for Brandon Morrow (oblique) in the Jays' rotation. In one career start (4 2/3 IP) against the Phillies, Cecil is 0-1 with a 9.64 ERA.

Every Kyle Kendrick start is a different one. You can either get a solid Kendrick, who will go deep into the game allowing one or two runs. You can get a combustable Kendrick, who gets shelled through the first three innings. You can also get a breaking Kendrick, who is solid up until a pressure situation and he crumbles. Kendrick has been effective enough for the Phillies, although they can't win a game. Hopefully the Phillies can get to Brett Cecil early.

Chooch is back: Carlos Ruiz is in today's lineup. Ruiz left Friday night's game after striking out with what it looked like at the time, a left oblique strain. The injury, however and thank fully, was only a cramp in Ruiz's side.