Kyle Kendrick Gets Nod In Re-Scheduled Series Opener Against Rays 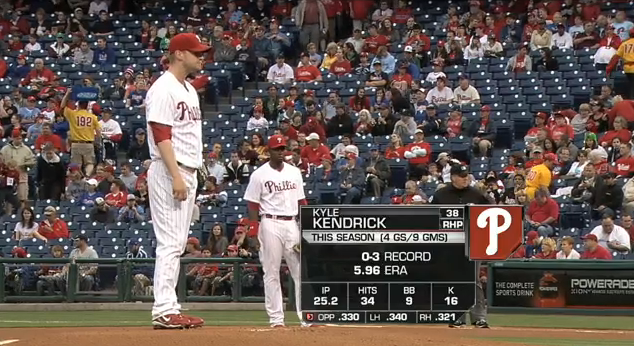 With last night's game being postponed, the Phillies will play a day-night double header on Sunday to finish the series with the Rays. Today, which was set to be game two, will be game one and Kyle Kendrick is on the hill for the Phils. Cliff Lee will start in game two of tomorrow's double header and he'll look for his first win. It seems every time the Rays are in town it rains.

Since I'm too lazy to re-write anything, I pulled this from my preview of yesterday's postponed game.

The Phillies were unable to pull off a sweep against the Rockies, but they still won two games out of three. I guess it's good enough, but now the real task is at hand. The Phillies are opening up a weekend series with the Tampa Rays this evening. The Rays (38-31) sit 3 1/2 games back in the AL East while the Phillies (33-38) still sit nine games back in their division. Given that the Rays are in one of the toughest divisions in baseball, they are still a great team. They're pitching is top notch and it's going to take great pitching on our part to keep it close. This is the first time these teams have met in Philly since the 2008 World Series.

Kyle Kendrick (2-7, 5.29 ERA) will make his eleventh start of the season this afternoon. Kendrick has been on a real rough patch in his last three starts. He's 0-3 with a 9.00 ERA in 16 innings pitched during those three starts. Kendrick has allowed at least five earned runs in each of his previous starts. Most recently, against the Blue Jays on Sunday, Kendrick allowed five earned runs on eight hits through 6 1/3 innings in a losing effort. Kendrick has certainley not been the same as he was in May (1-2, 2.89 ERA). Believe it or not, Kendrick has never pitched against the Rays in his career.

On the hill for the Rays will be righty James Shields (7-4, 3.72 ERA). Shields will make his fifteenth start of the season today. Shields is coming off of a solid outing against the Marlins. On Saturday, Shields tossed 7 2/3 innings, allowing 3 unearned runs on 8 hits and striking out five. Shields received the no-decision, however. In his career, Shields is 1-0 with a 4.50 ERA against the Phillies.

Is it me or has Jimmy Rollins been playing a lot better as of late? He's showing tremendous hustle in the field and on the basepaths and he's actually hitting the ball in the lead off position. Not to mention his lead off home run last night, he's hitting .363 (4-for-11) in his last three games with a home run, two RBI and two walks. Without Chase Utley, the Phillies need a leader on the field and Jimmy Rollins is that leader. Hopefully he can keep the good play up and hopefully it will turn around the whole team.

Shane Victorino will sit out today's game against the righty Shields.