Minnesota Mashes 17 Hits Against Kendrick and Not So Great Bullpen, Defeat Phils 11-7 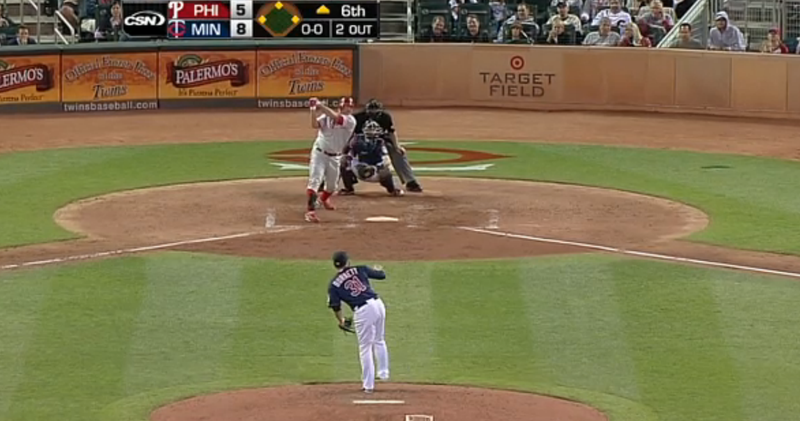 The Phillies were simply looking to have fun coming into this series against the Minnesota Twins. As assumed by the fans, the entire Phils lineup sported high socks tonight in honor of Jim Thome. Whether that's true or not, it's certainly different. Also, a majority of the team wore Hunter Pence's t-shirts that read "Fake Tough," an obvious shot at Nationals GM Mike Rizzo, who said this about Cole Hamels. Will that be enough to motivate the team towards a win?

The Phillies and Twins are both last in their divisions. With Kyle Kendrick starting against Nick Blackburn, you knew this was going to be an interesting ballgame.

And interesting it was. Denard Span kicked off the first inning with a bullet to right field, a solo homer which was absolutely annihilated.

This is where it really gets crazy: The Phillies scored multiple runs that almost tied the game. In the top of the fourth, Jim Thome was able to score on a groundout from Ty Wigginton. Michael Martinez singled to score Carlos Ruiz, followed by a double from Jimmy Rollins which scored Martinez and Mike Fontenot. 5-4 Twins.

Denard Span scored again, this time in the fourth on a double to deep right center from Joe Mauer. 6-4.

Hunter Pence made a costly error in the fifth which ended in a single becoming a triple. With Doumit on third, Plouffe doubled to send him home. Carroll also doubled which scored Plouffe. 8-4 Twins.

The Phils had the bases loaded in the sixth for John Mayberry who grounded out to score Carlos Ruiz. Jim Thome came up big with a two-run single to follow, cutting the Twins' lead to just one run.

In the bottom of the inning with Savery still in, Josh Willingham sent a ball to the Twins' bullpen out in left field. 9-7 Minnesota.

The sudden powerhouse that is Trevor Plouffe would double off of B.J. Rosenberg in the seventh, and he would score on a single from Carroll. After Span walked, Revere singled to score Carroll. 11-7.

Matt Capps kept the Phillies off the board in the top of the ninth, sending the Twins to their 25th win, and sending the Phils to their 34th loss. They're now 9 1/2 games back of the first place Nationals.

Another 8:10 start tomorrow night with Cole Hamels taking the mound for the Phillies.