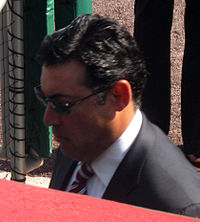 Pete Orr just was optioned down to Lehigh Valley today for the first time this year. Hector Luna and Mike Fontenot on the other hand are still on the roster. Juan Pierre, Ty Wigginton, and John Mayberry Jr. have all taken starter level at-bats this year.

You can imagine my frustration last night when the Phillies lost 2-1 to the Dodgers, with Cliff Lee striking out twelve batters, and Dom Brown was hitting two homers in a 4-for-5 night, with a double. He's white-hot, the big league club's ice cold. Makes you wonder right?

Let's cut the "everything will be fine" talk right now. Sure, they're only five back, and sure the division has done nothing to put them away, but this team is a .500 team at best, as is. I'm willing to give Ruben Amaro somewhat of a pass. His DL has looked like this so far:

So I'll give Ruben that he's got a really busted up team. That's true. I won't give him a full pass anymore on this team though.
His top prospect, the guy he wouldn't trade for Roy Halladay or Cliff Lee, is sitting in AAA hitting .282 and hitting balls clear out of the stadium right now while his offense is playing anemic ball. Knowing that Chase missed a big chunk of last season, he traded away Wilson Valdez (not exactly a great player) to make Michael Martinez (even worse) his utility man over a $420,000 difference in pay, then had to turn to his AAA shortstop to play Second when, shockingly, Chase was hurt again. When Martinez was hurt, he had to turn to Pete Orr, who he signed to a minor league deal to be the utility man, then proceeded to sign every available middle infielder cut from other teams (Blanco, Fontenot) to "build depth." His big move of the off-season, after the absolutely necessary signing of a top tier closer, was to give his aging shortstop a new contract, from which he has proceeded to produce a big turd for offensive stats in the lead-off spot this season. He's filled left-field with Juan Pierre, who's done a good job of slapping singles, but of course, we can't drive in singles hitters. Oh yeah, and Juan couldn't throw a guy out at second base or home from the shortstop position, let alone left field. Aside from Pierre's lack of power, Ruben also went into battle with a guy who probably needed a year of triple-A at-bats as his starting second baseman, a third baseman with zero power, and a depleted bench by injuries. As his team did not achieve early in the year, his big move so far has been to call up Hector Luna, Raul Valdes, and Jake Diekman. Meanwhile we have an anemic offense, paper-thin bullpen, bench full of cast-offs, and busted up pitching staff.
Now, all of this is not his fault. Did we know Jimmy would be this bad? Well no, but he has had half-years like this recently (2010). He's been hurt by injuries, Hunter Pence's inability to hit in the clutch, and Shane's underachieving. He's been saved by Chooch, Galvis not making a fool of himself, and Cole Hamels.
What would I do? I'd entertain trading Shane, sure, it's his walk year and he has value. I'd offer to hand Joe Blanton to anyone who lets us save a couple million. I'd call up Dom Brown so I could return a guy like Pierre to a more rightful roster space (fourth outfield type). I'd be in on Youkilis and any other power bat out there available, though I will give him some space here, because most teams aren't selling yet. I'd do something a bit more radical to try and shake this team up. Sure, Howard, Utley, Halladay, and the rest will be back at some point this season. Do you want to see how far back this team can get first? Ruben should get aggressive- and make a move.
Topics
Uncategorized